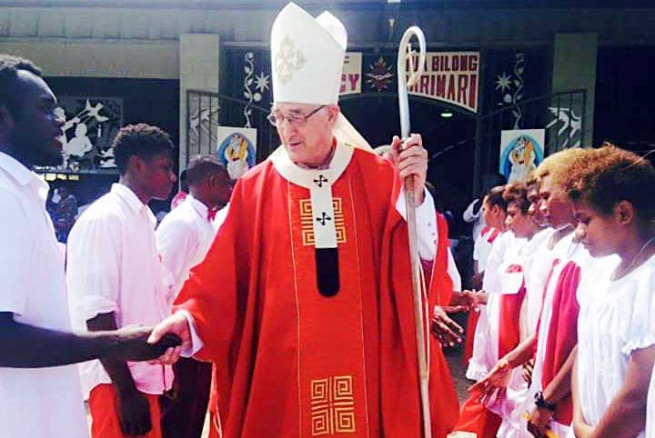 (ANS – Port Moresby) – “Just Land Agreements” was the topic presented by Archbishop Francesco Panfilo sdb, Archbishop of Rabaul in the 2nd CBC (Catholic Bishops Conference) talk series that was held at the Catholic Bishops Conference. Held on last month, in March 2020, the talk dealt with relevant land issues and had Bp Francis Meli, Bishop of Vanimo, together with teachers from different schools and other lay professionals all present. “The land belongs to you and you belong to the land,” said the Archbishop as he highlighted several relevant issues on his recently published booklet “Just Land Agreements.”

Agreements are involving customary land in PNG. “We realized that there are certain things to be done particularly in enlightening the landowners on how to deal with their land and so we came up with this idea of writing this booklet,” said Archbishop Francesco at the start of the talk. The Archbishop also spoke on his involvement in the West Pomio Oil Palm Project, known as the “Sigite Mukuts project” run by the Gilford Limited, a subsidiary of Rimbunan Hijau (RH). He spoke of the impact the project has had on the environment and the cry of the people to be heard.

They were the ones who approached him in 2015 and requested him to be the ‘Voice of the Voiceless’. “5.5 million hectares of land have been leased by national and foreign entities under the Special Agricultural Business Lease (SABL) and most of this land is now in the hands of foreigners,” he stated. The Archbishop, encouraged by the Holy Father’s Encyclical, Laudato Si’ (2015), saw the damage done to the environment through the different projects. He took up the issues requested by the people and realized that the more he dwelt in the issues, the more issues he uncovered.

“In Pomio,” he said, “there were tensions and divisions within the family units because some of the men had already found jobs in the companies and were getting something but the women were not happy because they saw that the waters and rivers were becoming dirty and the mountains were bare.”

A Q&A session followed at which several appreciated the booklet and the work done by the Archbishop. “The booklet, ‘Just Land Agreements’ is an important document. It makes us aware of important land issues,” said Michael Varpik. Anastasia Hasola, a teacher from the Marianville Secondary School, encouraged the audience and those listening in on Radio Maria to be aware of the issues presented. “I was struck that the Archbishop, at his age, is able to do so much and that we and many young people, can also do much. If we are able to take ownership and responsibility for our land, I believe there will be a better future for us. As animators here, we have that power to do something for a better Papua New Guinea,” she stated.

In concluding the talk, the Archbishop urged everyone to take care of our common home and said that it is not too late for people to ensure that all agreements entered into are based on justice, ensuring an equitable share of benefits and are protective of the environment.

Full text of the booklet "Just Land Agreements" for download.