Albania - In Kelmend mountains, bringing food to the "Invisible" 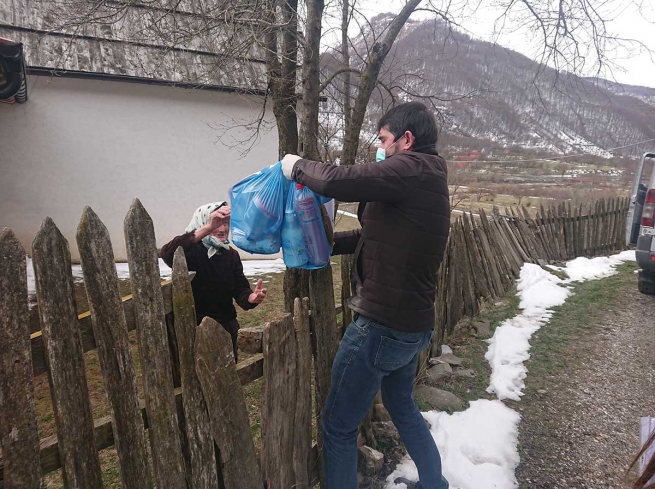 (ANS - Tirana) - Even in times of this pandemic, the volunteers from the Salesian NGO "International Volunteer for Development" (VIS) remain active to help the most needy. Tommaso Casati, VIS's project officer in Albania, talks about the difficulties, motivations and satisfactions in helping the people most in need of what he now feels to have become his new home.

Saturday 4 April, 7:30 in the morning. Four colleagues and myself get into the car, head in the direction of Kelmend, a mountainous area in Northern Albania, where VIS has been operating since 2009. In front of us, two vans that with difficulty climb the uphill road, overloaded with sacks of flour and basic necessities.

The objective is to deliver these food parcels to some especially needy families who live in one of Albania's most isolated and untouched regions. Twelve hours later, we returned to our homes with aching muscles, but satisfied that we had made our contribution, however small. So, too, had our distribution of basic necessities to some of the most needy families in the region of Malesia and Madhe ("the Great Mountain"), our project area, begun, which would continue for another 4 days.

Albania, the country that about 10 months ago welcomed me and became my home, is still a largely rural country, where most families live in a subsistence economy, informal and invisible in official statistics. In these years of commitment in Northern Albania, VIS has pursued a path of support, both in economic and training terms, to small farmers, producers and family-run tourism operators. And now, in this moment of crisis caused by the spread of a virus that we have all learned about by now, many of them find themselves completely isolated, without a source of income for the sustenance of their families and without being able to access state aid, precisely because many still not registered, in fact invisible.

In difficult times like this, there is a need to do something for people in difficulty. And if you work for an NGO with the history and mission of VIS, helping others becomes a moral duty. Deviating a little from strict logic and project objectives, we decided, in agreement with the institutions, to allocate funds, coming from the Italian Cooperation, to assist 78 of the most vulnerable families in Northern Albania. Furthermore, a further distribution of food packages has already been scheduled in about three weeks, when the stocks just delivered will be exhausted.

Only with large or small gestures of generosity, solidarity and strong civic sense can we get out of this dark moment and others that will come, stronger than before.