Paraguay - Procession of Mary Help of Christians on water 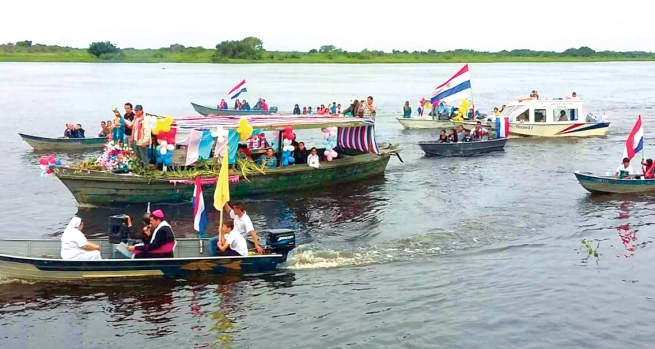 (ANS - Fuerte Olimpo) - Fuerte Olimpo is the name of a district and capital of the department of Alto Paraguay. It is located in the north of the country, on the Paraguay River. In 1879, following a request from Cardinal Lorenzo Nina to send Salesians to Paraguay, Don Bosco replied, "Two priests were planning to go to Paraguay but unfortunately this is no longer possible due to staff shortages in Buenos Aires." Many years passed before the Salesians arrived there in 1917. The Salesians and the Daughters of Mary Help of Christians settled on the banks of the Paraguay River to look after the needs of the local population and soon built a magnificent cathedral in honour of Mary Help of Christians. It was the pride of Fuerte Olimpo and of the whole of Chaco Paraguayo.

On 24 May every year the feast of Mary Help of Christians is celebrated. Around the Salesian world it is an occasion of great joy, but the celebration in Fuerte Olimpo is special for its originality, colour and participation.

On Saturday 21 May a procession in honour of the Virgin Mary Help of Christians, patroness of the Chao community, was held on the waters of the Paraguay River. A large number of boats, full of faithful and devotee of Mary, accompanied the religious activities at which Bishop Gabriel Escobar, SDB, of Chaco Paraguayo presided.

When it reached land, the procession continued on foot and the statue of the Virgin was brought to the Cathedral dedicated to her honour, on top of one of the hills of the city.

Every year many people come to Fuerte Olimpo from other parts of the department, especially from communities located in the interior of the Chaco Paraguayo, to participate in the religious activities in honour of Mary, Help of Christians, which will culminate tomorrow, 24 May.