India - Video in memory of Salesians killed in Imphal in 2001 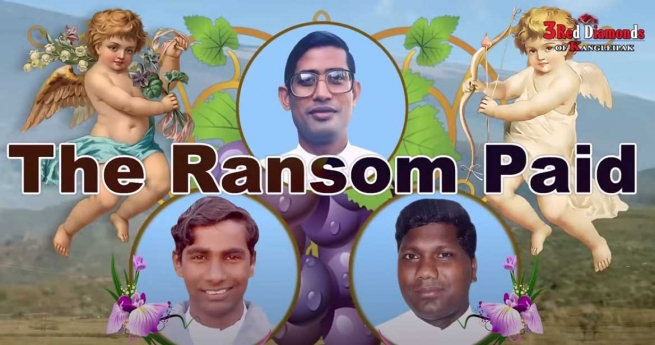 (ANS - Imphal) - "The Three Red Diamonds of Kangleipak, The Ransom Paid" - where Kangleipak recalls the ancient name of Manipur - is the title of a documentary made by Fr Thomas Josekutty Madathiparambil, an Indian Salesian, in memory of the three Salesians who were killed in Imphal to protect the young people present in the Salesian novitiate at the time. But it is not just a video, but rather a real tribute: in fact, Fr Josekutty was one of those novices and remembers that story very well, which opposed the generosity of sacrifice to the arrogance of violence.

In the morning of that fateful day, May 15, 2001, two men came to the Salesian Novitiate house at Ngarian, apparently for a visit. Bro. Shinu accompanied them around the house. They left soon after that. It is alleged that the same men returned in the evening of the same fully armed at about 6.45 pm, accompanied by a third man in a white Maruti van. One of them stood guard at the main gate while the other two went behind the house and asked for the father in charge. On being informed Fr. Raphael interrupted his conference for the 12 second-year novices and went out with Fr. Andreas (who'd been posted there three weeks earlier) to meet the gunmen in the volleyball court.

Fr. Raphael returned within few minutes and told the novices that the day’s talk was over and sent them to their study hall asking them not to leave the place at all costs. The novices saw him going to Chapel to pray, and then he went to his office and again into the volleyball court. It appears that Fr. Raphael took some money from his office for payment. The gunmen were heard saying that the sum was not sufficient. Fr. Andreas went into the house again.  Some of the novices saw Fr. Andreas taking money from his room and returning to the volleyball court.

For the next 45 minutes, the four of them were engaged in a discussion. The gunmen were overheard asking Fr. Raphael to bring out all the novices and separate them Nagas from the non-Nagas. Fr. Raphael told them, “they are young boys; why call them out? You tell me what you want of them and I will inform them.” After a while, the gunmen asked Bro. Shinu to come out of the house. He came out and the conversation continued further for about ten minutes.

At 7.50 pm the novices who were in the chapel for their personal prayer heard the sound of a gunshot from the road. Immediately after that signal, the two gunmen sprayed bullets into Fr. Raphael from an AK47 rifle. No sooner had Fr. Andreas bent forward to help Fr. Raphael than the gunmen opened indiscriminate fire at him. Cl. Shinu, at this juncture began to cry aloud and the gunmen pumped bullets into him too. After a few minutes, the killers slipped away under the cover of darkness. These brave sons of Don Bosco laid down their lives for the sake of their flock entrusted to their care. They shed their blood working for God and fellowmen.

Circumstances Leading to the Death of Frs. Raphael, Andreas and Cl. Shinu

The years 2000 and 2001 were one of the most turbulent times for the congregation and the Church in Imphal. The insurgency was at its peak and they were making demands on the church and all its institutions, especially the educational institutions. Some of the insurgent groups in Imphal valley made demands, asking the Catholic missionary schools to pay huge amounts of money to them to let them continue the missionary work in the valley. Paying them means supporting their work. So some of our confreres, namely Rev. Fr. Manuel Paikada SDB, Rev. Fr. Kunnathettu Vincent SDB, Rev. Fr. Chazhisseril Stephen SDB, and a few others, received life-threatening messages from them when they did not comply with their demands. In March 2001, all - except Late Rev. Fr. John Med SDB - left Imphal at the request of Rev. Fr. Provincial, as the conditions were not conducive for their stay there. So the insurgents could not lay their hands on the confreres working in the schools who were unwilling to comply to their unjust demands. Their target was to teach the priests and religious, especially the non-locals, a lesson, as targeting the local clergy and religious would mean intercommunity conflicts and bloodshed. They focused their attention to novitiates, a soft target, when they knew many non-local young members were present there. So they decided to teach us a lesson by attacking the novitiate, although the community had nothing to do with schools and its activities. This was very evident from their conversation with the fathers.  They were afraid to touch the confreres from Manipur as it would create a lot of difficulties for them as well. They demanded for all non-locals to be separated from the novices from Manipur. They wanted to kill all of them and teach the Church and Congregation a lesson.

Fr. Raphael Paliakara was born on 10 April 1955 at Chiyyaram – under the then Ollur parish in the Trichur diocese in the state of Kerala in India to P. V. Varunny and Mary of Paliakara family. He joined the Salesian aspirantate at Vaduthala in 1969 and in 1970 he arrived at Shilling to pursue his high school and pre-university studies at Savio Juniorate Mawlai. He made his first profession on 24 May 1976 and became a member of the Salesian congregation. He completed his post-novitiate training as well as graduation in 1979. He spent his years of practical training at Don Bosco School Dibrugarh and pronounced his final vows on 24 May 1982. He completed his theological training at Sacred Heart Theological College, Shillong, and was ordained a priest on 29 December 1984. He was appointed at Rua Home, Jorhat, in 1985. In 1991 he was transferred to Don Bosco Dibruagrh as Assistant Headmaster and counsellor of the aspirants. In 1993 he was appointed headmaster of Don Bosco High School, Dibrugarh. From 1996 – 1999 he specialized in formation pedagogy at the Salesian Pontifical University, Rome, and later went to Kent, England, for training in Human growth and development. On his return to India in October 1999, he was appointed Lecturer and librarian in Salesian College, Dimapur. In July 2000, he was appointed Novice Master at Ngarian, Imphal, Manipur.

Fr. Andreas Kindo was born on 2 December 1969 to Mr. Albinus Kindo and Mariam Lakra at Charry Munda in Kurdeg parish belonging to the diocese of Simdega in Jharkand. He passed his Bihar secondary school examination in the second division in 1985 from Nirmala High school Kahlijore. He had expressed his great longing to be a priest from his boyhood days. He hailed from a very pious Catholic family and was privileged to have parents who were very religious. He joined the Salesian aspirantate at Rua Home Jorhat and completed his pre-university exam in February 1989. He made his first profession and became a Salesian on 27 April 1990. He completed his graduation and post-novitiate training at Salesian College Dimapur in 1993. Practical training took him to Don Bosco Chingmeirong in April 1993 as assistant and Teacher. Towards the end of 1994, he was transferred to the novitiate at Ngarian as assistant and teacher to the novices. He completed his theological studies at Sacred Heart Theological College, Shillong, and was ordained a priest on 25 April 2000. In May 2000, Fr. Kindo was appointed as Assistant headmaster, Counsellor and Assistant parish priest at Don Bosco Chingmeirong, Imphal, Manipur. He had a working knowledge of Manipuri. He endeared himself to the people so much that a Manipuri family christened one of their sons ‘Kindo’. He was transferred to the Salesian novitiate at Ngarian in April 2001.

Cl. Shinu Joseph Valliparambil SDB was born on 27 March 1978 at Chakkittapara in the Thamarassery diocese in the Kozhikode district of Kerala State, India. He joined the Salesian aspirantate at Jorhat, Assam, after the completion of his SSLC examination 1993. He pronounced his first vows as a Salesian on 24 May 1997 at Ngarian, in the Salesian Novitiate.  He proceeded to the Salesian College of Higher Education, Dimapur, Nagland, for his Philosophical studies and graduation. He completed his post-novitiate studies with a first rank in Bachelor of Arts with English honours from Nagaland University in 2000. He was appointed as assistant and teacher of the novices at Ngarian in June 2000.

The video is currently available in English on YouTube. In the future, it will be subtitled to make it available in other languages too.