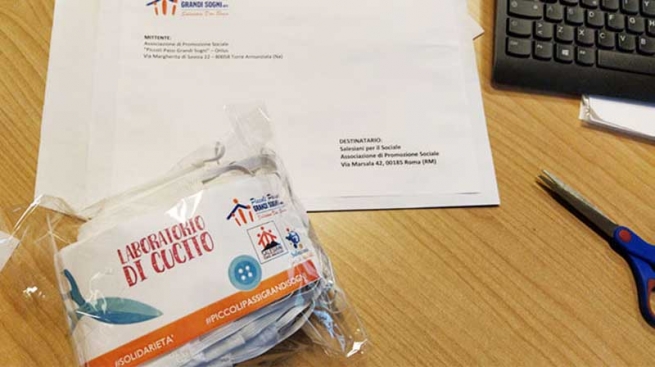 (ANS - Rome) - "We're here, with you!" This phrase has been repeated and heard many times over the past few months. As soon as the emergency began, the Salesians made themselves available to the many children and young people welcomed in the communities and centers scattered throughout Italy, guaranteeing proximity and concrete support to deal with this difficult pandemic. It was even more difficult for foster care family homes to live with this emergency: they could not be closed, as many of the boys housed had no other home to go to, while others risked returning to a family that would not have guaranteed their support.

For this reason, directors, educators and operators of the foster homes supported by "Salesians for the Social APS", thinking of the good of minors, have taken all precautions to avoid infection (masks, gloves, social distances): an emergency in the emergency!

Fr Antonio Carbone, who in Torre Annunziata coordinates two communities for minors, was among the first to ask for help from "Salesians per il Sociale APS". “We urgently need three sewing machines! Modu, one of our boys, was a tailor and now he is sewing 300 masks a day to be distributed free to the city's poor.” In just a few weeks, three new professional sewing machines were delivered to him, thus allowing Modu and his companions to start production. In the complete absence of masks, the contribution of Modu and his friends was essential, vital: “I'm putting my skills at the service of Father Antonio, of the people of Torre, of the Italians,” wrote Modu. “Don't worry Italy; everything will be fine!”

Eleonora, who in Santa Severa is responsible for the foster home "Stella del Cammino", asked for support for basic necessities and for help to pay for the utilities of the house. Thanks to the timely contribution sent by "Salesiani per il Sociale APS", Eleonora was able to purchase sanitizers, masks, and gloves to make the rooms of the home, where ten children live, safe.

Distance learning has been a method adopted in many of our structures, especially for extra school support and tutoring, guaranteed even during these months of emergency. Many families, however, found themselves unprepared for these new educational formulas as they lacked a PC, tablet, or a stable internet connection to enable their children to participate in the online video lessons. Fr Vincenzo Volpe, Director of the Salesian house of Santa Chiara in Palermo, wanted to speak for the many parents in difficulty in the Ballarò district, and asked for devices connected to the mobile network. Thanks to the collaboration of a regular supplier, within a few days the Salesian association delivered 5 tablets (with internet) to Sicily which, thanks to the structure's volunteers, were immediately distributed to those houses that needed them most urgently.

The effort of these weeks has been remarkable, but none of this would have been possible without the generous response of many benefactors to whom the Salesians today say a resounding: “Thank you!”

“There are still many requests that we are receiving in these hours and to which we would like to respond as soon as possible,” say the people in charge at the 'Salesiani per il Sociale APS. “For us too, a new phase of the emergency begins. There are new needs to be met and precautions to be taken. But once again, with more force, we want to reiterate that We're here and we don't want to stop!"