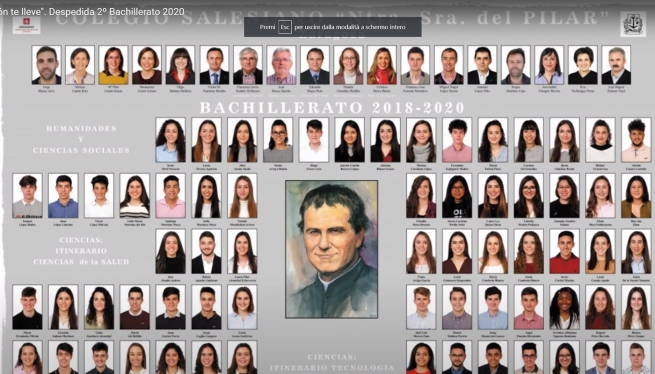 (ANS - Zaragoza) - “A stage that ends with a historic event. It will be a different generation, it is already a different generation: daring, ingenious, ... But above all courageous, you are making Don Bosco's motto your own: 'Forward, always forward'." Thus began the greeting video that the Salesian Institute of Zaragoza gave to the pupils who reached the end of their secondary school education.

The video: "Donde el corazón te lleve" (Where your heart brings you) directly appeals to that need to be close even at a distance, expresses that wanting to keep connections, even online, and sharing resources between teachers and students even in a cloistered condition.

In June tradition normally calls for the theaters and courtyards of the Salesian schools to be full of celebrations for awarding diplomas to thousands of students graduating from secondary school. In their best clothes they would have attended an event especially prepared for them and the occasion. And they would have said goodbye, in person, to a unique stage in their life with recognition, with affection, with a "see you soon", because "this will continue to be your home."

This June 2020, however, tor the thousands of students in the educative cycles who said goodbye to their classrooms there were, instead, numerous videos and messages going online, filling the net.

“The diploma does not have much to do with a banquet or a formal act: it is the sign that this Salesian house has left on each of you, that is the real diploma. Graduates in human values, for believers in Christian values, and for all, without exception, graduates in Salesian style, that unique and unmistakable style that focuses on sympathy, familiarity, closeness ... ", thus they state in the video of the Salesian institute "Lora Tamayo" of Jérez de la Frontera.

In La Almunia, the graduation ceremony was due to take place on 22 May. While in Algeciras, it was April 24th, the date of the Eucharist of thanksgiving. “You have made a treasure of the past three months with the best teachings. Many of you have shown that you are strong, able to face any difficulty and above all to adapt. It is you who have given us a masterful lesson this year during all this time," they were told in return.

"Un camino inolvidable" (An unforgottable journey) - tells the year of the students of the Salesians of Villena. Ten minutes of images to condense a fundamental part of their life: the message is a message of gratitude, but also of nostalgia for everything that has been lost in recent months.

Yet, not even Covid-19 has managed to dampen the enthusiasm of teachers and students who today close a fundamental stage in their lives via videos and messages published on social networks, but who are only waiting for a new moment in which they can meet again.