Laos - Interview with Sanya Boonprasert, founder of Past Pupils of "Don Bosco" of Vientiane 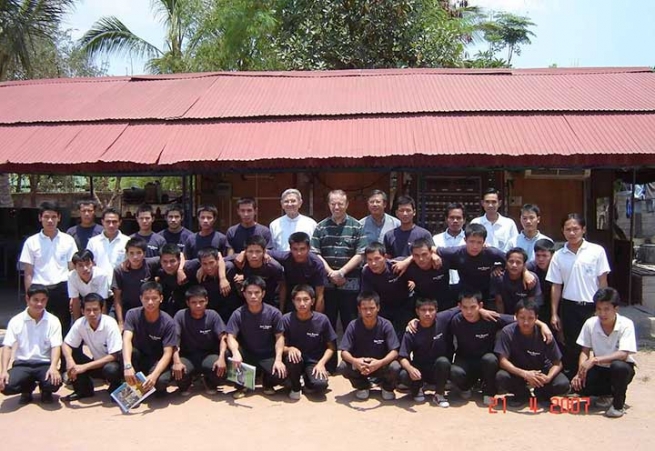 (ANS - Vientiane) - The "Don Bosco" Vocational Training Center (VTC) in Vientiane, capital of Laos, is the only Salesian presence in the country; it began in 2004, thanks to the zeal of Fr Tito Pedron. After a difficult start, the work was recognized by the Laotian government and currently welcomes about 150 students from every province of Laos. This is where Mr. Sanya Boonprasert works, the founder of the Past Pupils of the "Don Bosco" of Vientiane.

How did you start your work in Vientiane?

It was 2004. After two years at the Aspirantate in Nazareth, I prayed and said to Mary Help of Christians: "If there is an opportunity in my life to help children or young people in difficulty, I will follow the spirit of Bosco. And I will do it with joy." So when Fr Tito Pedron and the provincial council of Thailand decided to open a new work in Laos and thought about me, I immediately said yes. The first few years were humble. I started with courses for Electricians and Motorcycle Mechanics. The following year the first student arrived, his name was Thao Sansuk. We used the courtyard of our house, there was only a tent and a table. In the following years, younger people were admitted, who then became teachers once they graduated.

What were the main challenges during the first few years?

The challenge was to start a Salesian work from scratch in a new country. The goal was to open a Vocational Training Center in Vientiane. There were some problems, but in those cases, I consulted with Father Pedron and we sought a solution. Furthermore, when problems arose, I always turned to the image of Mary Help of Christians and Don Bosco in my room.

What are the best moments spent in Laos?

Our Vocational Training Center was closed at some point. But all the teachers and students of that time did not want to leave Don Bosco, nobody returned home. Everyone agreed to work for a year to find a solution. It was great. Another nice thing is to be able to see so many poor kids who manage to change their lives. Thanks to Don Bosco they had the opportunity to study, to make a career for themselves and therefore able to feed their families.

What is your dream?