Chile - Attempted arson at the National Temple of Gratitude 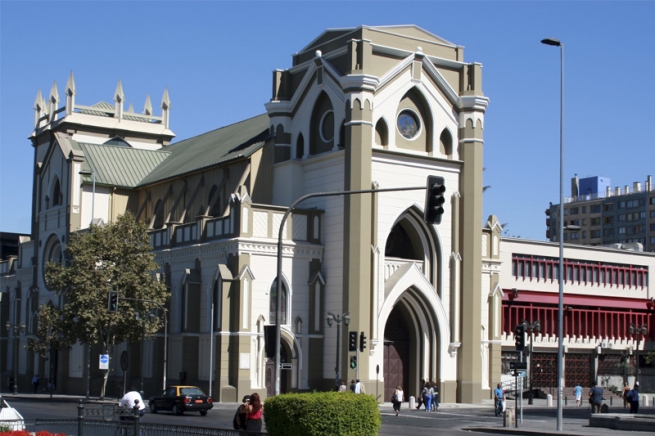 (ANS - Santiago) - For some time now in Chile we have been witnessing a series of attacks against Catholic churches. To date five churches have been set on fire. Bishop Héctor Vargas, SDB, of Temucho, stated emphatically that the church fires "are not an attack on the Church, but on the feelings of the community and the simple people, who with love and sacrifice built their spaces of prayer and transcendence". A few days ago there was an attempt to set fire to the doors of the National Temple of Gratitude which is entrusted to the Salesians. According to police, unknown individuals "sprayed a liquid but failed to damage the temple."

On Saturday 28 May, a few hours after the conclusion of the feast in honour of Mary Help of Christians, which included a large procession through the streets of the area, there was a new act of violence against the National Temple of Gratitude in the centre of Santiago.

Unknown assailants threw firebombs at the main doors and detonated a bomb but even these acts did not cause further damage. The timely action of the police led to those responsible running away.

The National Temple of Gratitude is home to the parish of Mary Help of Christians.  It is a national monument and a place of reflection and prayer for hundreds of people. Sustained attacks have been absorbed in the process of restoration that the building has experienced in recent years, after the serious damage caused by the February 2010 earthquake.

The national press has given space to what happened last Saturday, using also images of the damage of the last great attack, which occurred on the same day of the previous year.

This form of violence violates one of the most sensitive human rights which is that of freedom of worship. Echoing the words of the late Cardinal Silva Henríquez, SDB, Bishop Vargas said in a letter: "Chile has a vocation to understanding and not to conflict," and yet "no violent action will prevent the Church from pursuing its evangelizing mission."