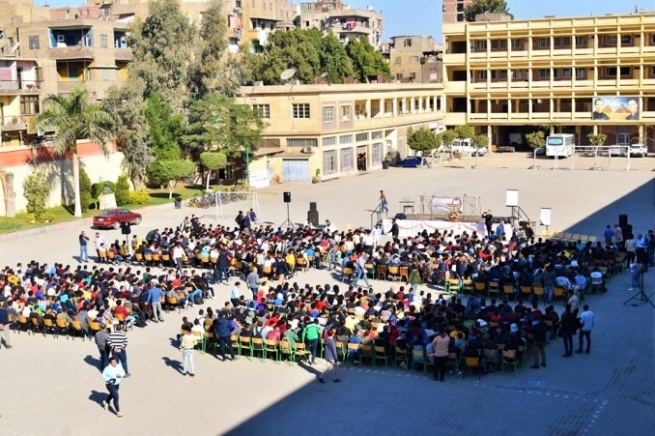 (ANS - Cairo) - The Don Bosco Technical Institute in Cairo now has access to clean and drinkable water thanks to the "Clean Water" initiative of "Salesian Mission", the Salesian Mission Office of New Rochelle, USA. Every year the Don Bosco Technical Institute welcomes more than 4,000 people who regularly attend courses and other activities, and who will thus be able to benefit from access to drinking water and proper hygiene.

The bathrooms of the Don Bosco Technical Institute had drastically deteriorated in recent years; they had cracks and bumps, and the floor insulation was losing its function due to the high and frequent exposure to moisture and the accumulation of water under the floor. Moreover, the materials used in the plumbing showed signs of corrosion and deterioration that caused frequent leaks.

With funds from “Salesian Missions” the Don Bosco Technical Institute has improved and renovated the two bathrooms and installed two sources of drinking water. In addition, the walls were plastered and a new concrete slab was poured. In each bathroom, five new toilets have been provided as well as new sinks. The school also hung posters above the sinks to remind students to practice good hygiene. Two 240-liter steel water coolers, each with three taps, were then purchased and installed. One will be placed inside the locker room and the other in the courtyard, so that students have access to water during and after physical education sessions and during recess.

"From drinking water to sanitation, to agriculture: water is essential for life," says Fr Gus Baek, Head of the Salesian Mission Office of New Rochelle. "This project on water in Egypt and in other countries of the world ensures that Salesian centers have the water they need, so that staff and students can work and learn in a healthy environment," he concluded.

According to the United Nations, 32.5% of Egyptians lived below the poverty line in 2018, compared to 27.8% in 2015 and 16.7% in 2000. Egypt, the 15th most densely populated by the world, is experiencing an increase in poverty and food insecurity, according to reports released by the UN food agency and its partners.