Slovakia - Solidarity of Past Pupils through "DiBosco Coffee" project 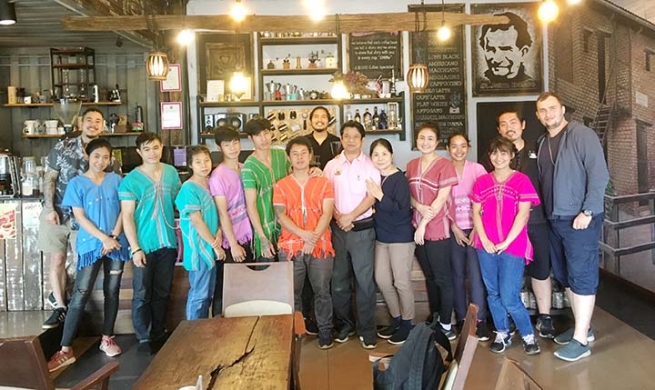 (ANS - Bratislava) - Peter Kováč, a Salesian Past Pupil, is the co-founder of the "DiBosco Coffee" project, an initiative developed in the Thai city of Chiang Mai, with the aim of creating a network - within the Past Pupils association - between producers and consumers.

How did this idea come about?

The idea was born in 2015, after the General Assembly of Past Pupils which was held in Rome. A friend who had taken part in the Assembly brought me samples of roasted coffee, which came from Thailand. At that time I had a small local coffee roaster and the idea of ​​buying the coffee immediately came to me. So I contacted the Past Pupils in Chiang Mai and we started building this dream step by step.

How was your first trip to Thailand?

I spent a week visiting the DiBosco team's farms, coffee shops and coffee roaster, guided by Mr. Paisan. I was amazed by the big heart of the Thais, always so smiling. At first, I thought it was going to be me offering them something, but in the end, it was they who showed me their way of working and living, offering me friendship and collaboration.

How is “DiBosco Coffee” growing and what connections are there with other countries?

This is the most "adventurous" part! Creating a network with other countries is a long-term and challenging process, but we are finding many people interested and great coffee wherever we go. We currently work with producers in Africa, Central and South America and Asia. So far we cooperate with countries like Colombia, Costa Rica, El Salvador, Haiti, USA, Thailand, Philippines, East Timor, Brazil, Kenya, Congo, Slovakia, Hungary, UK, Ireland, Malta, Poland and the Czech Republic. Slowly we are trying to expand our network on both sides: producers and customers/partners. It should be emphasized that ours is fair trade, that is to say that we know from whom we buy coffee, what the conditions under which the coffee is grown are, and that there is always an ethical approach.

What are the dreams and future prospects of "DiBosco Coffee"?

As mentioned, our objectives are long-term. We want to be able to enter new markets in America and Africa and we aim to open 1000 coffee shops in the next 10 years. With a network of this type, we will be able to develop the potential for international cooperation between the Past Pupils and, at the same time, we will be able to spread the knowledge of Don Bosco, the Salesians and the Past Pupils. With our coffee, we would like to encourage and bring some energy and joy to dreamers like us.