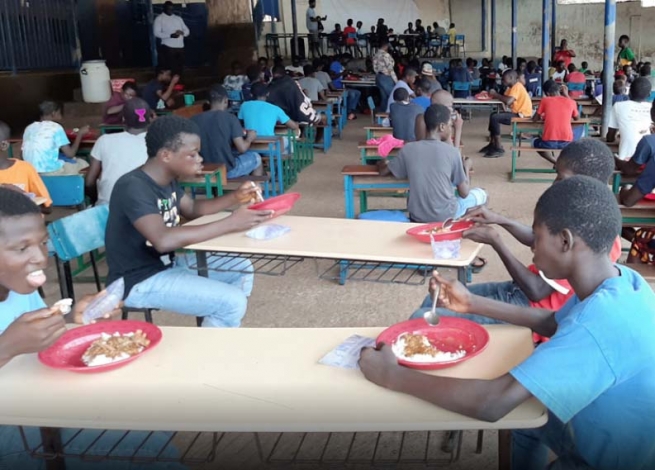 (ANS - Freetown) - Coronavirus infections in Sierra Leone have been well under control: there are few positive cases and few deaths. The government has lifted restrictions on mobility, but the main concern is that 47% of the population does not have access to running water and social distancing is very difficult to achieve due to the overcrowding in which most of the slum population lives. In this context, where the most serious consequence of the pandemic is poverty, Don Bosco Fambul continues to serve the people most in need.

Thanks to the experience gained during the Ebola epidemic, the Salesians started working from the very beginning on prevention and raising awareness of the virus. For this reason, the Salesians left the Don Bosco Fambul headquarters as a first-aid base and transferred the children and young people who were not infected to the buildings of the "New Fambul", on the capital's outskirts.

At the same time, the downtown bus, which was used for the "Don Bosco on Wheels" project, travels through the streets of Freetown's poor neighborhoods during the night. In this way, the Salesians and their collaborators identify and help street children and young girls who prostitute themselves. The bus has never stopped serving people: even during the curfew, it was able to go out onto the streets, having received permission from the police to do so.

Don Bosco Fambul is also the only institution that works with prisoners in this complex situation of fear of the spread of the coronavirus. The work in prisons, after the revolt that took place in the Pademba prison last April, due to the confusion generated by the virus, now requires the patience to start from scratch. "But let us not lose heart, because we are the only hope for them," adds the Salesian missionary.

The Salesian interest in helping minors, in many cases innocent or attributed with petty crimes, placed in cells together with adults, led the religious to negotiate agreements with the prison management for their release or to agree on various activities within the prison.

For this reason, in the midst of the pandemic, "Don Bosco Fambul" continues to carry out medical examinations of the injured and the sick, and has also re-equipped a section to house infected people, transforming the prison chapel into a clinic to isolate suspected cases.

Finally, the Salesian structure also takes care of distributing food to supplement the only meal that the prisoners receive every day.