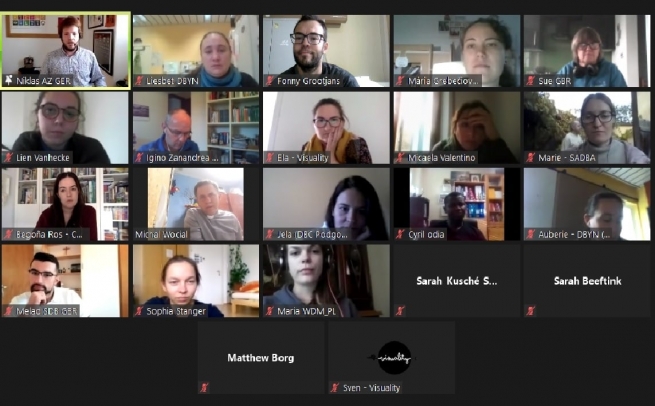 (ANS - Leuven) - The General Assembly of "Don Bosco Youth-Net", in which almost all member organizations took part, was held on Saturday 24 October 2020. Initially scheduled in presence in Brussels, Belgium, the meeting was re-proposed online to comply with the social distancing rules in force throughout Europe and the world.

For the second time in 2020, 18 European Salesian youth organizations working according to the Salesian style met to adopt reports, foster relationships, exchange good practices and ideas especially for online activities or activities that facilitate social distancing, to collect ideas for the DBYN's 20th anniversary celebration, and to proceed to the elections of the new Council and new President for 2020-2023.

The DBYN's General Executive Body meeting began with an overview of the local situations for each member organization, and then focused on the 2020 activity report, on the proposals for 2021 activities (with the postponement of activities not carried out in 2020, including its 20th anniversary celebrations), as well as on the first proposals for 2022 activities.

The documents relating to the 2020 economic report and the State of the Federation were also analyzed and approved.

Similarly, the accession of a new member, "Don Bosko Centar Podgorica"​​(Montenegro), was approved, after having been a partner for the past three years.

The secretariat and board members made sure to provide space for informal exchanges as well as a chance for each representative to get to know the other representatives and organizations around this large online table.

The appointment for the next face-to-face meeting is scheduled for the "Don Bosco Youth-Net" General Assembly in Brussels from 18 to 21 March 2021.