Italy – Ministry with Children of Migrants: a Vast Field Awaiting the Salesians 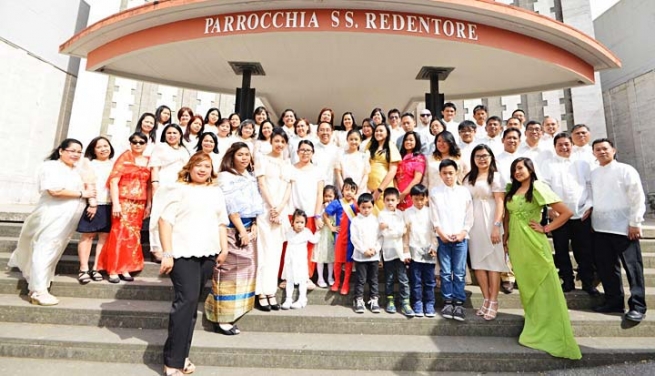 (ANS – Rome) – “I have seen that abroad the main focus of ministry for migrant Filipinos is on adult migrants, the Overseas Foreign Workers (OFW) who often have to take up double jobs in order to help their extended family. Yet, the needs of children of OFWs born in their new country are often not given due importance. Ministry for children of migrants is a whole new area that, to a great extent, has been abandoned”, expresses Fr Alfred Maravilla, from the Department for the Missions at the Generalate, Rome, who also ministers to Filipino migrants in the Parish of Santissimo Redentore at Val Melaina, Rome.

Like all migrants, Filipino migrants too bring with them the richness of their faith and cultures as well as the challenges of evangelization in their home country. In many cases they were nominal Catholics in the Philippines. Yet in a foreign land many return to their religious practices as a way to reaffirm their cultural identity.

The Sunday Eucharist not only becomes an important expression of their faith in the Lord. In fact the often ‘traditional’ gathering after Mass not only becomes an opportunity for celebration and social gathering with their countrymen and women but also a way to reaffirm their identity in a foreign land.

But I am even more convinced that ministry for migrant Filipinos needs to foster the initial proclamation to purify certain forms of popular religiosity as opportunities to stir up a renewed interest in the person of Jesus Christ so that their faith may be lived not only as something cultural but as an even more convinced personal adhesion to Him. In this way Sunday gatherings become more than just an opportunity for celebration and social gathering.

The OFWs are deeply rooted in their Filipino culture, which they seek to transmit fully to their children. Yet the children were born in this ‘new’ culture. For example, Italian is the first language of Filipino children born in Italy. They study in Italian. They speak with their friends in Italian and they practically consider Italy as their own home. Their Italian friends consider them ‘Filipino’ but they cannot fully comprehend Pilipino and they see the Philippines more as a vacation place than as their homeland. They come to Filipino Sunday Mass mainly because their parents bring them. But they do not feel at home in Italian Masses either because their parents never introduced them to celebrate with the Italian speaking Catholic community. Being ‘footloose’ could cause tensions in these young migrants. If not recognized in time and managed in its complexity, this situation could multiply the difficulties of these youth.

On the other hand, their specific condition as youth and migrants enables them to interact with greater flexibility and creativity with young people of their host country as well as with different other cultures. When accompanied, these children of migrants become important bridges of intercultural relation and a force in the re-evangelization not only of the other migrants but especially of their fellow young people in their host country. In fact I have met children of OFWs who have become precisely this. Indeed, they are the real missing protagonists in migrant ministry. Certainly, ministry for children of migrant families is a vast field awaiting the Salesians in all parts of the world!

These years of migrant ministry have helped me to come to two realizations: The importance of fostering initial proclamation among migrants and the urgent need for a ministry for the children of migrants.