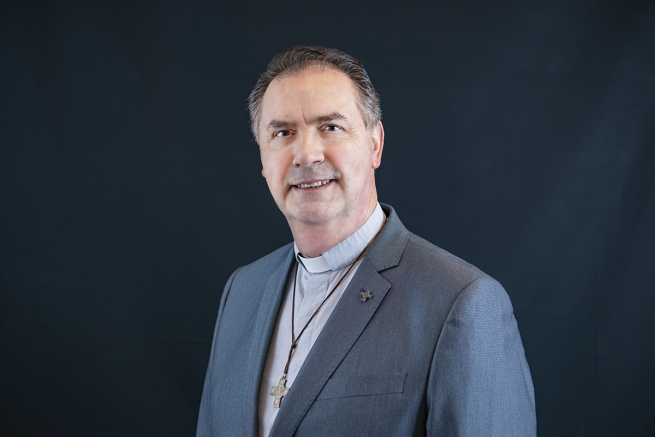 (ANS - Seville) - In a wide-ranging interview granted to the Spanish newspaper El Correo de Andalucía, the Rector Major, Fr Ángel Fernández Artime, addresses highly topical issues - both national, such as the debate on education in Spain, and international, such as the Salesian commitment to the poor during the pandemic. Today we publish the first of the two parts of the interview.

What do you think of the Celaá Law?

I must admit that the fact that I'm not in Spain prevents me from having a profound knowledge of the situation, but from what I know through the press and the information of my confreres in Spain, and all that I've experienced in my country in previous years with the various laws on education, I feel that it is, once again, a lost opportunity for a great Social Pact of the State for Education. The education of our children and our young people is something very sensitive and very delicate. But I am sad to say that in these times when there is so much talk of dialogue, of participation, of including and not excluding ..., we are unable to accept joining forces in favor of the new ones ...

Will this law be a problem for the Congregation in Spain?

So far, in the context of the various laws, we've managed to move forward. The strength lies in the unity, not only ours, but of all the other institutions with which we share this vocation for the education of young people: I'm thinking of the Catholic Schools of Spain, the Confederations of Parents and other institutions with which we share the same vision in the field of education and concerted teaching (enseñanza concertada). Keeping us together is essential. And it is essential not so much to defend our right to exist, which perhaps is not what is at stake now, but something deeper: the fundamental right to freedom of education as far as it refers to the right of parents to choose the type of education of their children, according to their civil, moral and religious convictions.

To conclude with the theme of the Celaá Law, do you think that, if the figure of Don Bosco were known, these "restrictions" would have been put in place against Concerted Education (Educación Concertada), which also includes our schools in Spain?

Fr Rodolfo Fierro, a Salesian of Don Bosco, already said this in his time, in 1910, speaking on behalf of the Salesians, in a context in which the so-called "Law of the Lock" was being debated (Editor's note: Legal text approved on December 27 1910 which forbade the establishment of any religious association or congregation without the express authorization of the Ministry of Justice, delivered by royal decree).

"I did not come to combat, I came to speak about the Salesian Society ... I came to simply explain, to inform, to invite you to inform yourselves personally by visiting our homes ..."

I'm convinced that, if they knew us, not only us, but also many religious institutions and educators who give up their lives for the education of young people, many prejudices and many falsehoods about concerted teaching, at least on Catholic education, which is what I know best, would fall to the wayside.

How has the Salesian Congregation adapted to this period of pandemic?

I think it's fair to say that we've adapted like everyone else, that is, as best we could, and how we gradually learned by following the guidelines of the civil authorities at all times, and at the same time observing on our part, with creativity, what we could do to make the Salesian mission go forward all over the world, and of course in our Spain. I must say that I'm very surprised by the educational and pastoral creativity that I have seen developing around me and in the various continents of the "Salesian world". There was a shower of initiatives of all kinds so that we could make ourselves present in a thousand ways.

What initiatives are the Salesians taking to combat the consequences of this virus?

A first front we've dealt with, and which we want to continue to do, is to ensure that the activities, educational actions and various social, pastoral and accompaniment services continue (in any way and in any form possible). It was very common to find in our presence many groups of young people ready at any moment to distribute food, to approach the most needy families, to offer online lessons to those who could not keep up with the circumstances. All over the world, we have distributed aid in 63 countries, thanks to the generosity shown by thousands of people in favor of the campaign we launched because of Covid-19. Publicly, by videoconference, I made known the destinations and projects of this aid received.

What is the role of the Salesian Missions these days?

Regarding the Salesian Missions, I can say with a profound sense of truth that, as Salesians of Don Bosco in the world, we are strongly committed to reaching the real peripheries, the places where people generally do not want to go. I know full well that we are not the only ones in the Church, of course. But I can testify that we, the children of Don Bosco, want to do so and we are doing it. In this sense, the journey that the Congregation is making in these 134 countries is in total harmony with what Don Bosco wanted and with his dream. Of course, I'm not saying we do everything right, but this is the path we are following. Next to us, there are many lay people, men and women, with whom we share this educational and evangelizing, social and humanizing mission. It is something magnificent, together with the many young people who live a social or missionary volunteer activity. These are, therefore, difficult times, but full of hope.

If Don Bosco lived in our time, what do you think his dream would be?

Without a doubt, his big dream would have been to see young people happy, today and in eternity, as he always said to his boys. From there, even the dream of no longer seeing any boy, girl or young person without someone who welcomes him as a friend, as an educator, as a father or mother. Obviously, his dream continues to be to prepare them for life and to offer them a transcendent meaning which, if they accept it freely, is ultimately God, because Don Bosco always wanted to bring his children closer to an encounter with God. His dream has not changed, it is the same as 162 years ago, and it will remain the same as long as there are young people in humanity and as long as there are abandoned, excluded and poor people.

Which of Don Bosco's dreams marked you the most?

More than choosing a dream, among the many he had, I prefer to say that what has always moved me and continues to move me today about Don Bosco is undoubtedly his educational passion for young people; his radical conviction of saying to himself every day “for you I study, for you I work, for you I am also ready to give my life”. These are words that, when you make them yours in your daily dedication to young people, fill you with strength and joy.