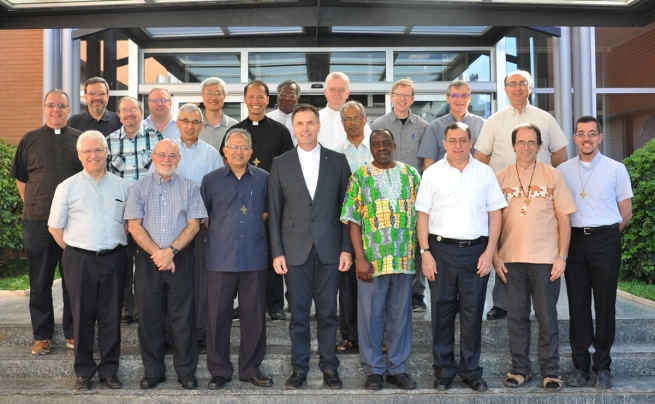 (ANS – Rome) – From June 17th to 19th, there was the World Encounter of reflection on the “Salesian Rector’s Manual”, which took as a reference the Manual of 1986. The meeting was attended by 20 people; Fr. Ángel Fernández Artime, Rector Major, and Fr. Ivo Coelho, General Councillor for Formation, with the team of his Dicastery, were also present at the meeting.

In the perspective of the Dicastery for Formation, beyond the world encounter “this was an opportunity to listen to the Salesians of the world, because experience is fundamental”. On the other hand, Fr. Ivo said that “a Rector must first of all be a man of faith. Without this essential element, the Salesian becomes a great organizer. A second fundamental element is the experience of Salesian charism. The Rector believes, feels and lives as a Salesian”.

The Rector Major encouraged the participants to work with enthusiasm, asking them “to take into account the responsibility of not making heavy, but pleasant the task of the Rector, trying to highlight the Salesian features of the Rector who, like Don Bosco, is called to exert fatherliness, to take care of the confrères and of the collaborators entrusted to him, and to do all this in an attitude of service”.

On the first day, the Rector’s Manual of 1986 was studied, with reflections of the participants, debates and contributions of the work groups.

Later on, there was the presentation of an interesting study of the figure of the Rector in each of the Regions. From the reflections of the participants emerged many proposals and initiatives that were collected for further reflections to assess at the various levels of the Congregation.

The last day was dedicated to develop the methodology of work, which must involve local Communities, Rectors, Provincials with their Councils, Regional Commissions and Dicasteries. This aims at drafting a manual which can be used as a reference handbook for the formation, animation and accompaniment of Rectors.

The participants favourably welcomed this encounter. The blog activated by the Dicastery for Formation – https://formazionesdb.org/ – contains news and documents, and offers the possibility to participate in various formation initiatives organized by the Dicastery.