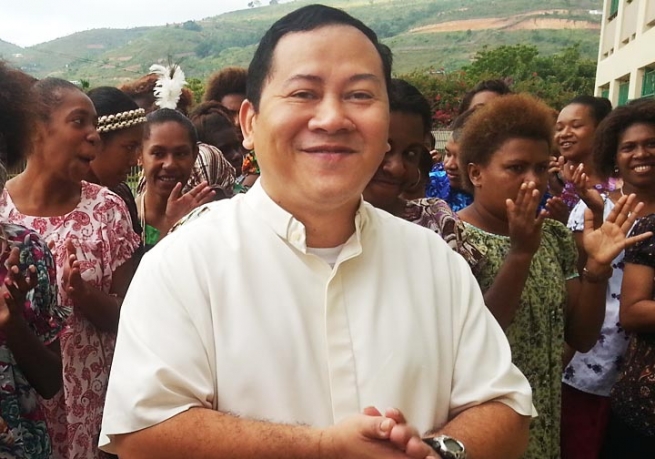 (ANS – Rome) – The Rector Major with the consent of his council has appointed Fr Pedro BAQUERO Junior as the first Superior of the Papua New Guinea – Solomon Islands Vice-province for the period of 6 years (2016-2022).

Fr Peter was born in Manila (Philippines) on September 15, 1970 and made his first profession in Bacolod, Granada on April 1, 1990 and the perpetual profession on March 24, 1998. He was ordained in 1999 in Parañaque, after completing his philosophy and theology studies in Canlubang and Parañaque (FIN). From the period of his practical training in PNG (Port Moresby, Gabutu and Araimiri) he followed the missionary vocation ad gentes. Moreover he attended the Missionary Ongoing Formation Course in Rome (UPS). He speaks Tagalog – Filipino, English and Tok Pisin (PNG).

After returning to the PNG Delegation in 2000 he spent most of the time in the front-line mission in the Gulf Province (Araimiri and Lariau – 10 years), then in the capital of Port Moresby (Gabutu Don Bosco Technical School) and since 2014 as the Superior Delegate of Papua New Guinea – Solomon Islands (PGS). During past 16 years he was assigned to the following ministries: Parish priest, Principal of Secondary School, Economer, Rector and Delegation councilor for Youth Ministry. During past 30 months he put a lot of energy to the animation of the whole Delegation according the SEPP and Strategic plan worked out by the Delegation Assemblies with more stability of animation and governance of the main sectors of Salesian Mission and Charism.

The young and multicultural Vice-province of PGS (Papua New Guinea – Solomon Islands) was canonically established by Fr Ángel Fernandez Artime on December 23, 2015, just 35 years after arrival of the first Salesian missionaries to Araimiri in 1980.

The installation of the first PGS Vice-province Superior is scheduled for July 9th in East Boroko, Port Moresby - PNG.