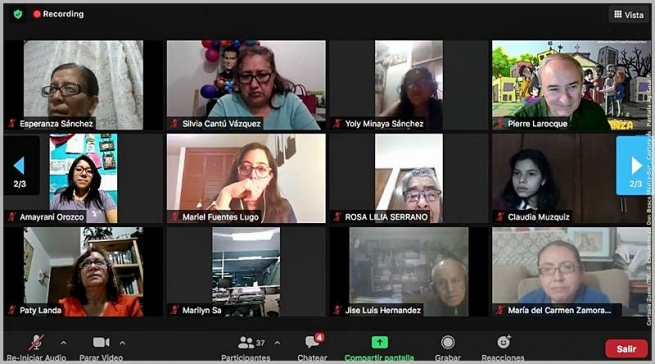 (ANS - Mexico City) - To celebrate the 150th anniversary of the birth of the Past Pupils of Don Bosco, the Past Pupils active in Southern Mexico since July 2020 are organizing various digital video conferences. This series of events, entitled, for its weekly frequency, "Don Bosco's Tuesdays", has already made known every group of the Salesian Family present in Mexico, and has recently opened a new thematic cycle. The Salesian Family of Mexico, which participates en masse in these digital events, last February 14 also came together in condolences for the passing of Fr Rodolfo Sánchez Romo, an appreciated Salesian, which took place on the previous 12 February.

The appointments of “Tuesday with Don Bosco” - broadcast at 8.30 pm on Zoom and on the Facebook page of the Past Pupils - since last January 19th are aimed at presenting the social activities inspired by the charism of the Saint of Youth.

On the theme "The Salesian preferential option for poor and excluded young people", Virginia Cerón Martínez, Delegate for Mission Animation and Social Works of the Province of the Daughters of Mary Help of Christians "Our Lady of Guadalupe" (MME), presented the various works and apostolates of the Province, their objectives, their scope and future expectations.

On 26 January the project "Yolia niñas de la Calle A.C." was presented, a work founded 25 years ago by the professional educator Mónica Rábago González, Salesian Cooperator, together with other associates of that group. The special guest of that Tuesday spoke of how her motivation to serve was born at a very young age, thanks to the testimony of an FMA, and her experience of people in extreme poverty in the Salesian Youth Centers and Oratories.

On 2 February it was the turn of the "Déjame Ayudarte" (Let me help you) foundation, the "Chavos de Don Bosco" Salesian Project, which was presented by Fr Noé Jorge Lara, SDB, Vicar of the foundation, who illustrated the details of the Mission, Vision and Values of the institution, which assist children, adolescents and young people in vulnerable situations in a typically Salesian perspective, that is, preventive.

On Tuesday 9 February, instead, there was the "Institute for the Improvement of Indigenous Communities - Don Bosco" (IMCI Don Bosco) in Matagallinas. The great service to the Mixe population and other ethnic groups in the area, as well as programs for agricultural production, animal care, textile workshops, together with formal courses, school and boarding school ... were at the center of the intervention by Fr Pedro Narvaéz Cab, SDB, who did not fail to recall how the Salesian work has been the cradle of many vocations, or where many young Salesians have carried out their formation and forged their conviction of serving God in the style Don Bosco.