India – “Snehotsava”: a Festival of Friendship 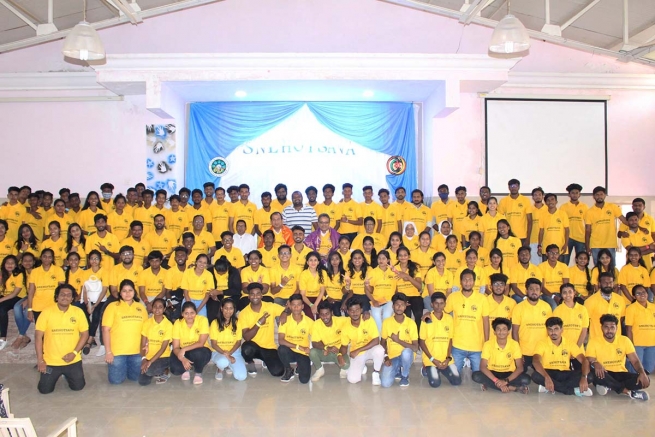 (ANS – Bangalore) – Bosco Youth, Bangalore Zone, organized “Snehotsava: A Festival Of Friendship” as part of the Zonal Convention at Don Bosco Church, Lingarajapuram. It was an event meant to give young people an awareness on relationships. Fr Joe Kokandathil SDB was the chief Resource Person for the day. 120 Bosco Youth from 6 Bosco Youth units of Bangalore Zone actively participated in the programme. 10 Salesians (priests and brothers) and 2 Salesian Sisters were present for the event. Snehotsava was indeed a rejuvenating experience for the young people after a year-long gap due to the pandemic and other related issues. SNEHOTSAVA had the special privilege of being visited by Rev Fr Biju Michael SDB, the Regional of South Asia, and Rev Fr Robert Simon, the National Coordinator for Don Bosco Youth Services.

Snehotsava began with a formal inauguration ceremony. Fr Aloysious Santiago, the Parish Priest and Rector of Lingarajapuram, was the chief guest. In his presidential address, he spoke to young people about the need for authentic and true relationships.

Fr Joe Kokandathil began the morning session with Mindfulness Meditation and then through a series of practical exercises he helped young people to deal with their emotions. The young people really enjoyed those exercises. In the afternoon, Fr Joe spoke on relationship, especially cautioning the young people on the various blocks or obstacles that may prevent true and authentic relationships.

Once the sessions were over, there was a Panel Discussion where young people were given the opportunity to speak about their perspectives on Parent-child relationships, relationships among friends, and relationships between a boy and a girl. Fr Joe Tony Previnth SDB and Sr Alice Chacko FMA spoke on one’s Relationship with God and Relationship in Religious Life respectively.

Mrs and Mr Monica Sagayaraj, a couple from Don Bosco Church, Lingarajapuram, were invited to talk about the bond of love between them. After each of them spoke, the floor was open for questions and clarifications. The young people asked some relevant questions and the discussion truly became a time of great learning.

Snehotsava had a beautiful moment of blessing when Rev Fr Biju SDB, the Regional of South Asia, and Rev Fr Robert Simon, the National Coordinator for Don Bosco Youth Services, paid a visit. They were welcomed by the youth with friendship bands.

Snehotsava was the first youth gathering that Fr Biju attended after he took over as the Regional of South Asia that once again made the Province of Bangalore very proud. In his talk, he spoke on love and friendship from the Biblical point of view and stated that friendship is one of the highest forms of love. Then Fr Simon reminded the Bosco Youth that they were part of a Global Youth Movement and invited the participants to retain their identity as Salesian youth wherever they might be.

Snehotsava was concluded with a vote of thanks by Fr William D'Souza SDB, the Regional Director of Bosco Youth, Karnataka.