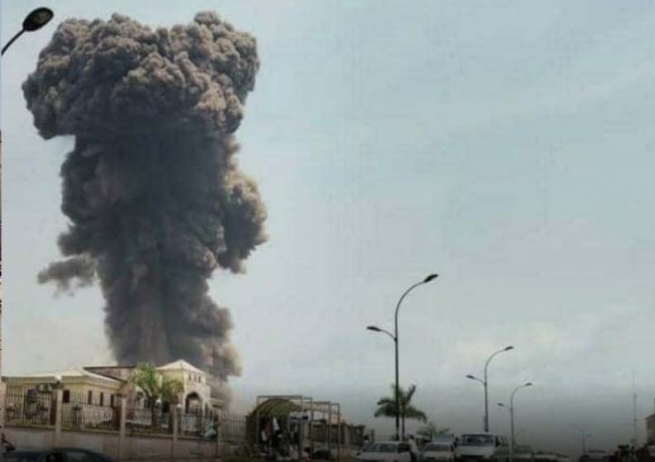 (ANS - Bata) - The official figures of the chain of explosions on March 7 in a military barracks in the most populated city and economic capital of Equatorial Guinea, Bata, report 107 dead and more than 600 injured, “but there are still many people missing and unidentified under the rubble,” explain the Salesians of Bata. From the first moment, as happened with the pandemic, the affected population that lost everything went to the Salesian's Spanish Institute in Bata to receive help and attention.

Two weeks have passed and the Salesian educational center has welcomed more than 100 people into its structures, most of whom are women and minors. Another 200 people come every day for lunch or dinner and another large group of 200 people are being helped in the neighborhoods where they have been relocated as displaced persons.

The Salesians present in Equatorial Guinea, as in many other countries of the world, are a point of reference for the population. A Caritas social canteen serves 200 people affected by the consequences of the pandemic on Wednesdays and Saturdays at the Salesian Spanish Institute in Bata, and another youth canteen is active on Sundays.

Thus, when hundreds of people saw their homes destroyed by the shock wave of the explosions that took place in the Nkoantoma barracks, the natural reflex was to ask the spiritual Sons of Don Bosco for help. The explosions were devastating: in the areas farthest from the accident, its effects are also visible in the broken glass and doors, in cracked walls; while the epicenter of the disaster is still closed.

The Salesian Mission Office of Madrid, “Misiones Salesianas” has already sent 5,000 euros for a first phase of aid. However, much more needs to be done: there is an urgent need for clothes, non-perishable food, medicines ...

“We are experiencing something worse than a horror movie. The Salesian school is located 2.5 kilometers from the site of the explosions and we did not suffer major damage, but everything shook and even I jumped because of the shock wave,” recalls Salesian Francisco Moro, Director of the Spanish Institute of the Salesians of Bata.

The first explosion occurred at three in the afternoon and “a large black column made us think of a crashed plane. Then the next ones arrived and it became known that it had happened in an army barracks. There was a moment when it seemed like a war, because all the ammunition was exploding,” continues the Salesian.

“Everyone arrived traumatized by what they had experienced and from the first moment we offered them the opportunity to have breakfast, lunch and dinner. Today we take the sick to hospitals, we visit them and we also have leisure activities to distract the children. But we need help to be able to continue to take care of them, because many others come to have lunch here due to the consequences of the pandemic,” explains the director of the Salesian school.