Italy – Service to children first of all and in all circumstances. Digital experience of "DonBoScuola" 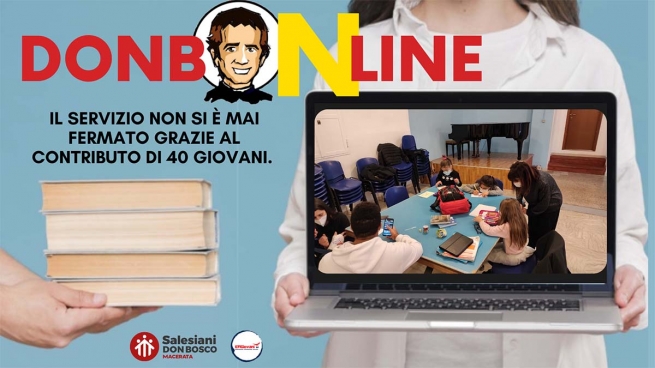 (ANS - Macerata) - At exactly 3 pm, for many years, every afternoon, at the Salesian oratory-youth center in Macerata, many children and young people gather for the "DonBoScuola", a project that aims, on the one hand, to providing scholastic support to children who suffer from educational and non-educational poverty, with the aim of ensuring that they are accompanied in their daily study; and on the other, to increase the dynamics of socialization and inclusion through workshops and games. Even the "DonBoScuola" was affected by the pandemic and its consequences. But it hasn't stopped them at all.

As long as the situation allowed it, DonBoScuola continued its traditional activities in person: of the fifty children and young people enrolled, in compliance with all the regulations and safety requirements, thirty were welcomed every day, thanks to the daily support of five volunteers who supported the children in study and play.

But on Macerata being deemed a "red zone" meant that the children could no longer reach the Salesian House. For this reason the Salesian educative-pastoral community, from Tuesday 9 March, has put all the energies available to start "DonBoScuola" in remote or distance mode: it has involved children aged 16 to 19 belonging to the "Clan & Novitiate" of the Scouts group and the “Compagnia del Savio”, as well as young university students; all of them dedicating hemselves to the individual, albeit digital, accompaniment of the small recipients of the initiative.

Trying to convey light-heartedness and cohesion, they helped the children with their homework, kept them company at recess and organized workshops and games for them. For all the volunteers, especially the younger ones, it was a chance to give a prompt and responsible response to the many service opportunities that are usually offered.

Here are the testimonials of some of the volunteers:

"I was also afraid of not being able to help them as I wanted, but the two girls I helped were very good and I was very pleased to help them."

"Donboscuola is a way to feel useful and to give myself in my small way, especially in this situation, in which we all feel powerless against something greater than us".

"When I was asked to do service at Donboscuola, I was frankly afraid, because for the first time I would have found myself alone with a child without the support of a group ... But in just two days of service I received the best gift possible: a 10-year-old boy who reveals his dreams to you. I found a very intelligent and sensitive child behind a complicated situation, and I learned not to stop at appearances and that we shouldn't expect everything here and now”.