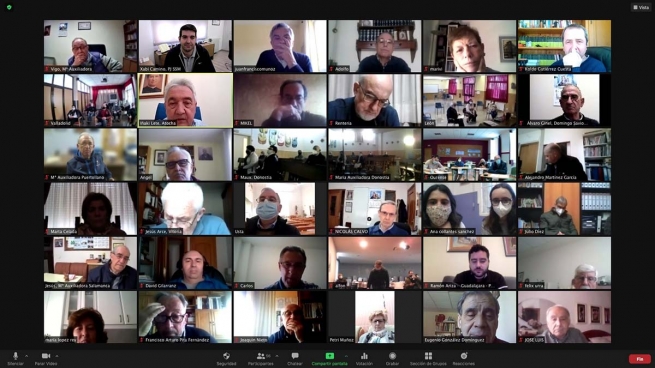 (ANS - Madrid) - The meeting of the Parish Councils of the Salesians of the "St James the Greater" province took place on Saturday 13 March. Over 100 people attended the event and it was a moment of sharing prayer, reflection and good practices.

In the first part of the day, during the speech entitled: "The Congress of the Laity: people of God reaching out", by Isaac Martin, (member of the executive committee of the Congress), the previous year's discussion was presented and the current situation analyzed. In the second part, a series of good pastoral practices deriving from the pandemic were presented.

The parishes had the opportunity to describe their experiences and to highlight the resources used in catechesis and in faith groups, in adult groups and in Caritas. These practices are proposals that perhaps would not have arisen if they had not experienced this health emergency but which, like many other things, are here to stay.

The case of the “Cristo Libertador de Salesianos Parla” parish in Madrid was examined. Here, the parents offer the children the first part of the catechesis at home, while the catechists complete it in person in the parish. It is the parish itself that, every week, sends parents - via email or via Whatsapp - all the material necessary for catechesis at home. The material consists of catechesis for the parents themselves; a roadmap with the children; some questions to foster dialogue, a prayer to start or end the sessions, and a few videos on the subject that can be found on Youtube.

In the parish of Mary Help of Christians in Vigo, instead, the Sunday Eucharist remains an important meeting point, but the catechesis takes place online. "Don Bosco began with an Ave Maria and we must continue with the online Ave Maria," commented the parish priest, Fr Lorenzo Ramos.

Something similar is also practiced in the parish of St Domenico Savio in Madrid where, to promote the importance of the family in catechesis, every Sunday a small catechesis on the text of the Gospel is sent to families via WhatsApp. "We want to strengthen the idea that family catechesis is important and that the family is a place of catechesis before the parish itself," said Fr Álvaro Ginel.

During the event, many good practices were presented. The Salesian parishes of Atocha, Guadalajara, Salamanca and León explained the initiatives carried out, which always aim to make young people protagonists.

A noteworthy fact is the participation, for the first time, of all the Pastoral Councils in a single event, since this meeting normally took place in three different places in the Province. On this occasion, the situation caused by the pandemic thus provided an opportunity to join forces and converge in the same workspace.