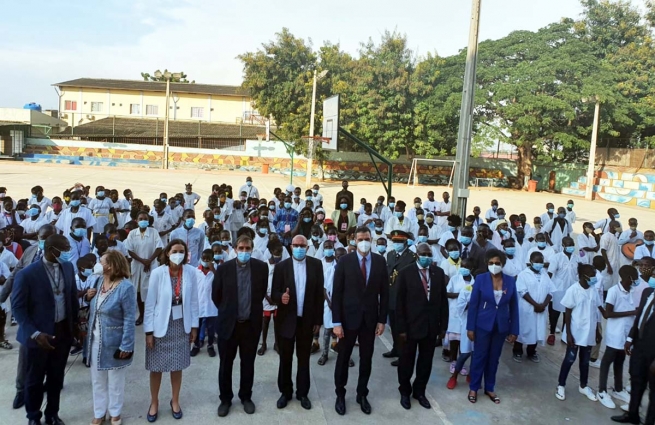 (ANS - Luanda) - After the institutional and commercial meeting held in Angola on 8 April, the President of the Spanish government, Pedro Sanchez, visited the "Dom Bosco" Center of the Luanda Salesians, located in the Lixeira district, one of the city's most disadvantaged districts, which is home to 250,000 inhabitants and whose name translates as “landfill”.

The Salesians arrived there in 1996, starting their educational work with small schools. It was 2003 when the current center was built, thanks to the Spanish Agency for International Development Cooperation (AECID, in Spanish) and its Portuguese counterpart.

A sign painted at the entrance to the Salesian school, which reads "Educating is a matter of the heart", welcomed Pedro Sánchez. About 1,500 students greeted the Spanish politician, who personally received the affection and sympathy of the students, whose smiles were evident even if hidden behind masks.

The President of the Spanish Government had time to visit the facilities of the Center, see firsthand the educational work that is carried out there, take an official photo with the authorities and school staff, and give a short speech to those present, in which he underlined the "commendable" educational work that the Salesians carry out in the country. Accompanying him were the Superior of the Vice Province of Angola, the Uruguayan Salesian Fr Martín Lasarte, and his provincial Vicar and Director of the Center, the Spanish Salesian missionary Fr Manuel Ordóñez.

On his official Twitter account, the President of the Spanish government expressed his satisfaction with the visit to the Salesian educational center, underlining the importance of education for the progress of society: “We are proud that Spanish citizens are working on this project and promoting the formation of Angolan children and adolescents. It symbolizes the great collaboration between Spain and Angola.”

About 6,000 students are educated in this educational center, including infant, primary, secondary education, bachelor's-level degrees and vocational school. Given the lack of classrooms to accommodate all students, the center has lessons in three shifts: already at 7:30 am the school opens its doors to younger students, then continues in the afternoon with primary and secondary school students, and finally, in the afternoon and evening, with the students of the bachelor's degree, until 10:30 pm.

Thanks to the work they carry out with the students of this center, the Salesians have received the National Literacy Prize for several years; and the “Don Bosco Method”, as it is called, has also served as a reference for the Angolan government in the process of literacy. Without forgetting that vocational training and attention to minors in situations of vulnerability are other characteristics of this Salesian educational center.

In a Country severely affected by the war (1975-2002), the Salesians have been present since 1981, and they arrived there in response to the missionary appeal made by the then Rector Major, Fr Egidio Viganó, through the "Africa Project". Currently, the Congregation animates 11 houses scattered throughout the country, with about 120 Salesians, more than half of whom are in the formation phase.