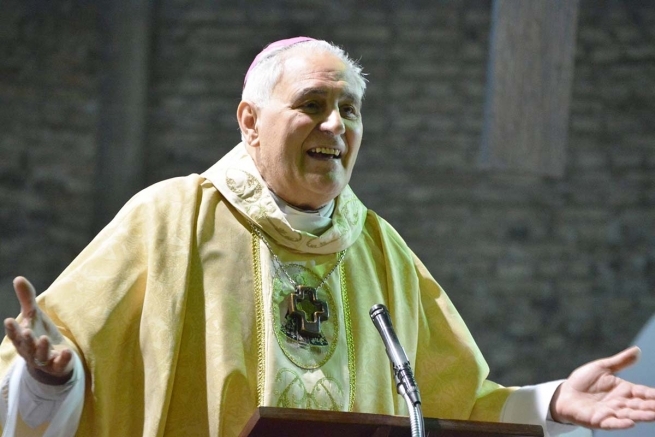 (ANS - Pucallpa) - His loved ones - first and foremost the poor, the indigenous and the needy whom he has always served – shall miss Msgr. Marcello Melani, Salesian, Bishop Emeritus of Neuquén, Argentina. The prelate died yesterday morning, April 14, at the age of 82, while hospitalized in Pucallpa, Peru, from complications generated by the Covid-19 virus.

With 59 years as a Salesian, 51 as a priest and 28 as a bishop, the prelate lived in Peru, where he was sent as a missionary ad vitam, as part of the 150th Salesian Missionary Expedition. At that moment, faithful to his episcopal motto - "Not to be served, but to serve" - ​​Msgr. Melani acknowledged: “I believe the Lord keeps telling me 'Don't be afraid ... I'm by your side'. The Christian life is a missionary life, we must not be afraid to follow it… With Jesus everything is possible.”

Upon hearing the news, the Salesian Provincial of Peru, Fr Manolo Cayo SDB, shared: "On 8 December 2019, he arrived in the Apostolic Vicariate of Pucallpa ... During this period, he dedicated himself completely to the people who came to him for advice and prayers. At the end of March, he contracted the Covid-19 virus and, following the complications, he experienced his Easter today, which leaves us very sad and, at the same time, very grateful for so much dedication and generosity. Dear Marcello: you lived your motto intensely, you served and gave yourself generously to your people, you gave everything. Your missionary heart rests in peace, but your example and your testimony will remain alive among us, as a clear and luminous sign of God's love for us."

Marcello Angiolo Melani was born in Florence on September 15, 1938. He made his first religious profession on 16 August 1962 in Chieri and was ordained a priest in Turin on 21 March 1970.

In 1971, he arrived as a missionary in Argentine Patagonia and for just over 20 years he served there as Director and as Parish Priest of various works (Bahia Blanca, Esquel, Junín de los Andes, Bariloche). On 23 July 1993, he was appointed coadjutor bishop of Viedma, was ordained bishop on 18 September 1993, and assumed the office of titular bishop of Viedma, by succession, on 28 June 1995. On 9 January 2002, he was appointed bishop of Neuquén. In the Argentine Episcopal Conference, he was a member of the Commission for Aboriginal Pastoral Care and of the Commission on Migration.

After presenting his resignation from episcopal service, from the end of 2011 he returned to serving the needy in Salesian works: first in Zapala, near Neuquén, then again in Junín de los Andes, finally, in Peru, in the Apostolic Vicariate of Pucallpa.

On his Facebook page, the testimonies full of affection from those who knew him multiply. Below, a short interview with him in which he talks about his choice to leave as a missionary at the age of 81 years.