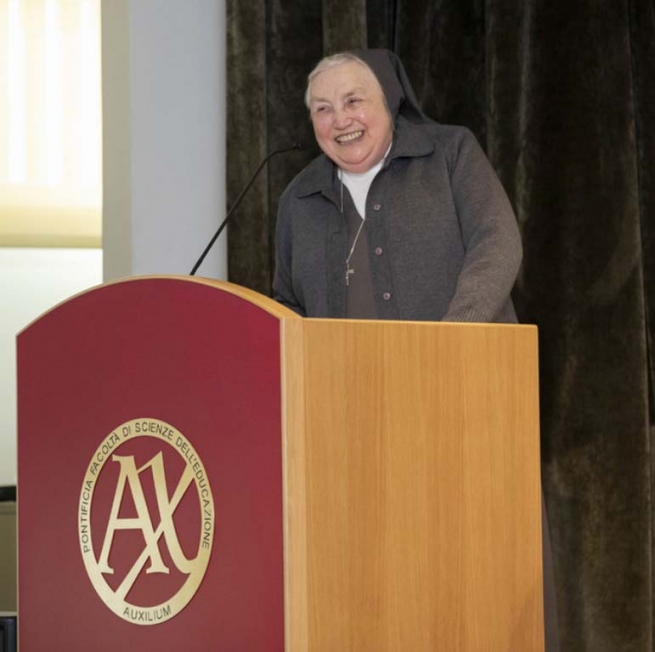 (ANS - Rome) - Yesterday, Sunday 25 April, the so-called "Feast Day of Thanks 2021" of the Institute of the Daughters of Mary Help of Christians (FMA) took place towards its Superior General, Mother Yvonne Reungoat. The feast day saw the physical participation of Mother Reungoat and a fair number of her sisters at the "Mother Angela Vespa" House, seat of the Pontifical Faculty of Educational Sciences "Auxilium", as well as the participation of many religious from all over the world via internet. For the occasion, Fr Ángel Fernández Artime, Rector Major of the Salesians and Father and Center of Unity of the Salesian Family, presided over the Eucharist.

The theme chosen for the day was: “On the net, for a culture of life”. And in fact, being online is one of the most precious resources for expanding creative and collaborative energies, just as it was for expressing to Mother Reungoat the gratitude of the FMA, the educating communities, the laity and young people of the Salesian Family who share the Salesian charismatic mission.

The FMA Mother General reached the Auxilium headquarters in the middle of the morning, being welcomed at the entrance, among flags and flowers, by Sister María del Carmen Canales, Superior of the Vice Province "Mary Mother of the Church", and by other religious of the communities that compose it - always in compliance with health safety standards.

“You have received so many THANKS through the network. Now we want you to hear the beating of all the hearts of the FMA and of the educating communities of which we want to be spokespersons,” said Sister del Carmen Canales. “Our Thanks wants to express the fruitful life that exists in all our continents, the life given made culture of so many sisters of all different ages and cultures.”

Subsequently, the Eucharistic Celebration took place on Good Shepherd Sunday. Flanked by Fr Maria Arokiam Kanaga, Superior of the "Mother of Wisdom" Vice Province of the Salesian Pontifical University (UPS), and by his personal secretary, Fr Nino Zingale, the Rector Major recalled that the Good Shepherd recognizes and loves all his sheep, and is ready to lay down his life for them. And he remarked how the attention to "other sheep that do not come from this enclosure", as written in the Gospel, is something typical and proper of the pastoral action of the Salesian Family and of the FMA and of Mother Reungoat's governing action.

The day of gratitude then continued with a moment of celebration with songs and dances typical of various cultures in the "John Paul II" hall of the Auxilium, during which messages of gratitude to Mother Reungoat were heard from all five continents.

At the end of the day, the Mother General of the FMA also thanked everyone for all the affection received, for the organization by the Vice Province "Mary Mother of the Church", and for the presence of Fr Á.F. Artime. And with reference to the feast day and the initiatives that the FMA and the whole Salesian Family carry out in this time of pandemic, she said: "Our hearts know no distance."