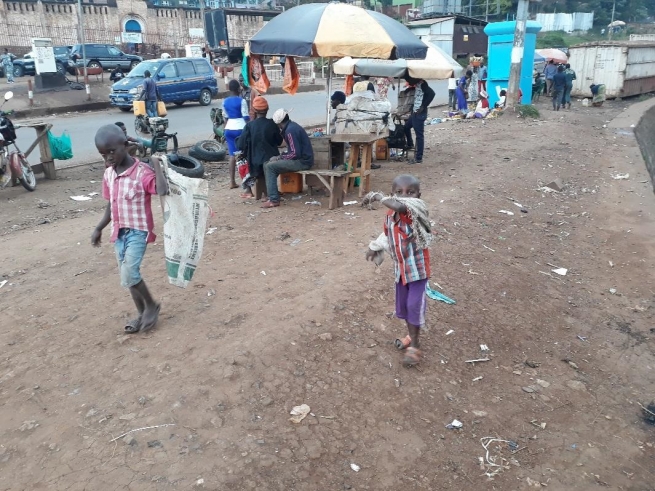 (ANS - Bukavu) - Since its inception, the "Don Bosco Center" of Bukavu, in the Democratic Republic of Congo, has been interested in children and young people in street situations. Although other realities in this sector have already been operating in the city for some time, the Salesians have felt the responsibility of taking the initiative and organizing a "Forum on the fate of children in street situations: challenges and perspectives", which will be held over the next few days from Thursday 6 to Friday 7 May 2021, at the Archbishopric of Bukavu.

Since 2015, the "Tuwe Wafundi" School of Crafts of the Don Bosco Center welcomes every year a good hundred young people aged 17 to 22 on the street and offers them free vocational training for 13 months through courses in carpentry, automotive mechanics, assembly-welding and masonry. Moreover, since 2019, with the support of the NGO "Louvain Coopération", it welcomes every year 20 children aged 10 to 15 who had chosen the street as a home, to host them, feed them, dress them, treat them, educate them ... And finally reunite them with their families.

These two activities continue and develop in a positive way. But the Sons of Don Bosco realized that they are small compared to the number of children and young people who, together with their collaborators, still meet along the roads of Bukavu and in the South Kivu region. And that is why they launched the idea of ​​a forum that broadens reflection, stimulates synergies, and produces direct and concrete effects at various levels.

The two-day program includes, among the various interventions, presentations on specific topics such as: "The challenges of the problem of street children, the real roots of the problem in the context of the DR Congo, the impacts on the child, society and future generations"; or “The consequences of sexual violence, of which underage girls living on the street are sometimes victims, and the hardship of their general situation”; there will then be time for the presentation of the work carried out by various organizations active in the recovery of street children, as well as to hear some testimonies in person.

The organization of the forum itself, in the reality of Bukavu, is not very simple and obviously requires a commitment of resources first. But although this initiative in favor of street children, "may seem indirect, given that it is not immediately in favor of vulnerable children, in the long run it may prove more effective, guaranteeing the expansion of the action and continuity," says the organizer of the Forum, the Salesian missionary, stationed in Bukavu, Fr Piero Gavioli.

On the occasion of the forum, the Don Bosco Center in Bukavu also distributed two leaflets, illustrating the reality of street children in the city and its suburbs respectively; and the activities of the Salesian house.

Both documents, available only in French, are visible and downloadable at the bottom of the page.