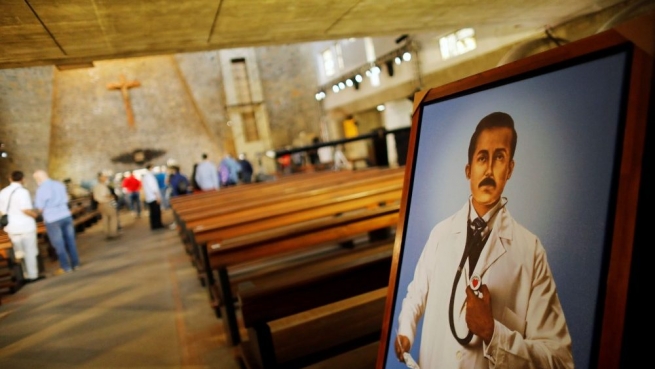 (ANS - Caracas) - Venezuelan Eliana Gherardi, international head of Formation of the Women's Association of the Salesian Family "Damas Salesianas", speaks today of Blessed José Gregorio Hernández Cisneros, the fourth Blessed Venezuelan, known as "the doctor of the poor", while the echo of his beatification ceremony, which took place last Friday, April 30, in Caracas, is still alive throughout the country.

Eliana explained to Vatican News what the figure of this doctor, scientist and Franciscan tertiary represents for the Venezuelan Church and for the entire world. He was born on 26 October 1864 in the city of Isnotú, in the state of Trujillo, and died on 29 June 1919 in the Venezuelan capital.

“José Gregorio is a simple and humane figure who, as a doctor, dedicated himself to the service of the poorest. His example teaches us what faith and hope are and that we must always work for the common good, in the place where we find ourselves, and above all for the most needy,” said Ms Gherardi, highlighting the style of closeness, generosity and total dedication of this "believing man, of great faith in God" who knew how to give so much love to those rejected by society.

Moreover, the beatification of the "doctor of the poor" came in a critical context for Venezuela, with the country shaken by the current pandemic and by the previous political, economic and social crises that have severely tested it in recent years. Precisely with this in mind, Ms Gherardi underlines the importance of this event as a "unifying element".

"For Venezuela, the beatification of José Gregorio represents a moment of joy, faith, hope and union of a country ... José Gregorio unites the country, because for everyone he is a figure of hope in the well-being of all the Venezuelan people," she concludes.

José Gregorio Hernández Cisneros, a faithful lay person, was "a doctor filled with science and faith," said Pope Francis said of him, Sunday 2 May, after the Regina Caeli. “He was able to recognise the face of Christ in the sick and, like the Good Samaritan, he helped them with evangelical charity. May his example help us to care for those who suffer in body and spirit.”

The Association of the "Damas Salesianas", founded in 1968 in Caracas by the Salesian Fr Miguel González, constitutes the 16th group of the Salesian Family, in which it joined in 1988. The activities of the ADS are focused on health and education and they develop programs aimed at providing assistance to people with limited resources, job training and comprehensive assistance to children, young people and women, according to a perspective of human promotion and evangelizing action.

The "Damas Salesianas" currently carry out their mission through over 140 centers spread throughout America, Asia, Africa and Europe.