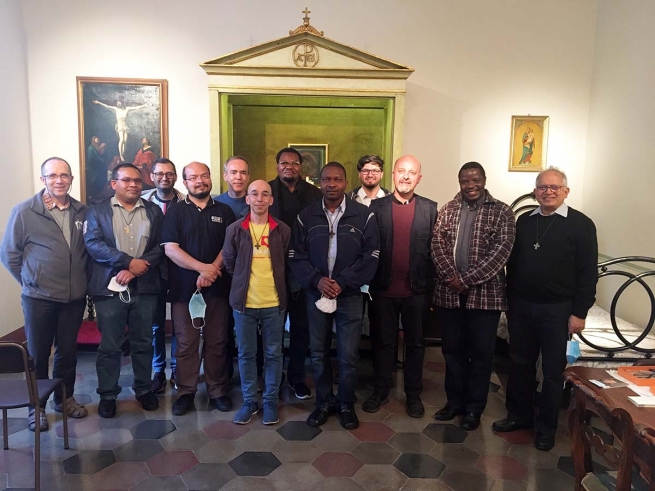 (ANS - Rome) - On Friday 21 May, at the Salesian Central Office, in the Sacro Cuore house in Rome, the meeting of the Salesians attending the course for formators at the Salesian Pontifical University (UPS) took place with the Formation Department team. It was a moment of fraternity and a return to the sources of the charism.

A first meeting of this kind took place at the UPS on 18 May, animated by Salesian brother Raymond Callo, a member of the Formation Department, and dedicated to personal spiritual accompaniment, in line with the Salesian accompaniment school which will begin in August in Piedmont. That meeting also included a practical session of spiritual direction in a group, which allowed for an experiential approach to the topic.

In the meeting on Friday 21, the Councilor for Formation, Fr Ivo Coelho presented the Rector Major's and the Council's six-year program, as regards Formation. In the next moment of sharing, important points were touched upon, such as the process of revising the Ratio, the specific formation of the two forms of the one Salesian vocation, the dynamic of grace and freedom that is the basis of every form of accompaniment.

There was then a moment of verification of the experience of the course that the 10 confreres from 10 Provinces and four Salesian Regions are concluding; for the future, they hoped for a strengthening of the Salesian dimension in the four months of the course, given the encouraging increase of Salesians taking part in it.

The second part of the meeting was dedicated to a visit to the Salesian places kept at the Sacred Heart, led by Bro. Cosimo Cossu, SDB.

As underlined by the Rector Major's Vicar, Fr Stefano Martoglio, during the final "goodnight" in the Camerette rooms of Don Bosco, today it is especially illuminating to look at Valdocco and the charism of the holy founder with his eyes, as he contemplated it in the letter from Rome in 1884 and in the many events that characterized his long stay, on several occasions, in the Eternal City. Through this gaze, one grasps what Don Bosco cared for in the season of his maturity, one perceives the presence of a spiritual and pedagogical heritage to be valued and appreciated increasingly more.

This charismatic treasure linked to the Basilica of the Sacred Heart becomes all the more significant as the 400th anniversary of the death of St. Francis de Sales approaches - next year, 2022. It is from him, in fact, that the profound inspiration that animates the Preventive System, which makes loving kindness its most characteristic expression. And it is also in St. Francis de Sales that the first root of devotion to the Sacred Heart is found, bearing in mind that St Marguerite-Marie Alacoque, from whose mystical experiences the devotion to the Sacred Heart will come to life, belonged to the order of the Visitation, founded by the bishop from Geneva together with Saint Joan of Chantal.

This visit by Salesian formators from all over the world encourages us to make the Salesian places in Rome a permanent source of formation that renews fidelity to the spirit of Don Bosco.