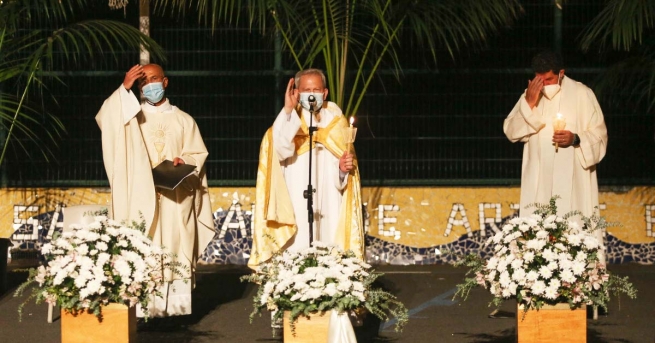 (ANS - Funchal) - Conducted on behalf of the Rector Major, Fr Ángel Fernández Artime, and as part of the Extraordinary Visitation to the Province of Portugal, Fr Gildásio Santos, General Councilor for Social Communication, visited the Salesian work in Funchal from 7 to 13 May and in Manique from 14 to 20 May. Of special meaning, then, was the pilgrimage of May 15 to Fatima.

In Funchal, Fr Mendes said he was enchanted by the island, by the people and, of course, by the Sons of Don Bosco who animate the work. During his stay he met the Salesian community, all sectors of the school, the parish and the students. On behalf of the Rector Major, he addressed a word of greeting and encouragement to all for the educational and pastoral work they carry out.

He also met with the ordinary Bishop of the diocese, Msgr. Nuno Brás, and with the Regional Secretary for Education, Science and Technology of Madeira, Jorge Carvalho, from whom he was able to receive excellent feedback on the work done by the Salesians in their 70 years of presence on the island of Madeira.

In an interview with the radio and the newspaper Jornal da Madeira, he declared that to educate and evangelize, “technology is not enough. It is important to look into the eyes”; and that in order to educate it is necessary to be present among young people with the heart of the Good Shepherd, with the knowledge of the educator, and with the simplicity and joy characteristic of the Salesians.

On May 13, he also presided over the ceremonies for the feast day of Our Lady of Fatima, walking through the streets of the parish in procession and presiding over the solemn Eucharist.

During his visit to Manique, Fr Mendes had numerous meetings with the various groups that make up the Salesian Educational-Pastoral Community (CEP): an individual conversation with each Salesian, moments of dialogue with the Salesian Family, the CEP Council, teachers and school staff, the Pastoral Team and the young people.

Given that during this pastoral year a parish in Alcabideche was also entrusted to the Salesians, the General Councilor was also guided in a reconnaissance visit of the territory and of this parish.

On Saturday 15 May, as mentioned, he led the pilgrimage of the Salesian Family to Fatima, and presided over the Eucharist in the shrine. In his message he underlined the importance of Mary for the Christian life and especially for the life of the Salesian Family, and comparing the context of the apparition of Fatima (towards the end of the First World War, in 1917) and the current context of the pandemic, concluded that Mary is always present in the life of suffering humanity.

Then, meeting young people, he stressed the importance of art, both because it is something much appreciated by them, and because it is a noble instrument of education and evangelization; and he added that through the arts it is young people who take the initiative and through it they can transmit values, knowledge and principles.