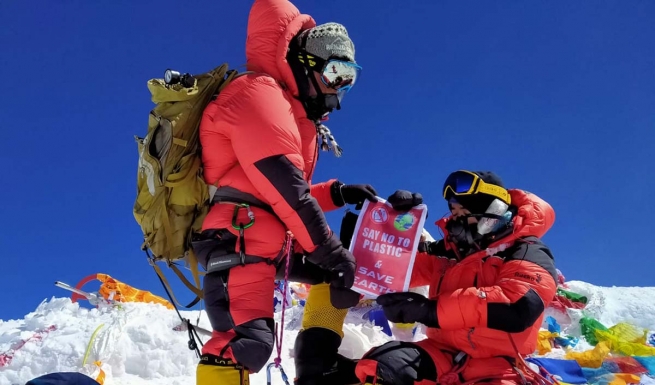 (ANS – Dimapur) – Fulfilling his life-long dream, Tagit Sorang Abraham reached the peak of Mount Everest on 31st May 2021 at 8.45 am. After a week of foul weather, the weather gods smiled and Sorang Abraham and his companions could march to claim their crown.

Tagit Sorang Abraham was born on 30th June 1996 as the first child of Mr. Taha Sorang and Yache Sorang Pip Sorang village in Kra Daadi district of Arunachal Pradesh, India. It is the last of the villages that dot India’s border with the Tibet Autonomous Region of China. It is so remote that even today it is not connected by roads. His family was extremely poor. He began his schooling at St. Claret’s School, Boasimla, and later shifted to Government Higher Secondary School, Itanagar. He graduated from Dera Natung Government College, Itanagar.

From an early age, Sorang Abraham felt attracted to the Catholic faith. He received baptism along with his maternal uncle at Sacred Heart Church, Naharlagun in the year 2000. While at Itanagar he stayed with his maternal uncle and his cousin Yanang Sorang. Abraham joined the youth group of the Salesians run at St. Mary’s Parish, Itanagar. He was a regular altar server. He served as the Secretary of the Parish Youth Organization as well as the Education Secretary of the youth wing of All Arunachal Pradesh Catholic Association (AAPCA).

In 2016 Sorang Abraham joined the Association of the Salesian Cooperators as an aspirant and made his promise on 22nd October 2019 when Rector Major Fr. Ángel Fernández Artime visited the Salesian Province of Dimapur, India. He served as a hostel warden of Don Bosco Youth Centre, Itanagar as well as on the staff of Childline, an NGO dedicated to the rescue and rehabilitation of Youth at Risk.

From childhood, Sorang Abraham felt drawn to Mount Everest. He had read about Bachandri Pal, the first Indian woman to scale Everest, and about Tati Mra the first Everester of Arunachal Pradesh. The Director of Sanglay Laden Sports School offered Sorang Abraham the opportunity to receive the Basic Mountaineering Course at the National Institute of Mountaineering and Allied Sports at Dirang, West Kameng District of Arunachal Pradesh in 2013. In March 2017 he scaled Mount Kangto the highest peak of Arunachal Pradesh and in November 2017 Mount Chumo. On 16th April 2018, he climbed the Island Peak from Everest Base Camp in Nepal. On 31st July 2019, he climbed Mount Kang Yetse in Leh-Ladakh which has a height of 6215 mts.

Everest remained a distant dream as he couldn’t gather sufficient funds to meet the expenses of an Everest expedition. He didn’t give up hope. In 2021 the Department of Youth Affairs, Government of Arunachal Pradesh offered a grant of a million Rupees towards the expenses. He collected another million Rupees from friends and well-wishers and took a loan of six hundred thousand. Finally, he had sufficient funds to make the trip and in the month of May he reached Base Camp II in Nepal. Days of inclement weather followed and most of the mountaineers gave up hope and returned to their countries. The Sherpa who was leading the group wanted to abandon the climb altogether and return home as it would be extremely dangerous to undertake a climb in such weather conditions. Abraham knew that another trip would be impossible for him. He is a great devotee of Mother Mary. He recited the Rosary and read the Bible praying the Lord to give him good weather. On 29th May the weather improved and on 30th May they began their ascent to the peak and on 31st May at 8.45 am they reached the summit of the peak. There standing on the highest peak on the earth he gave thanks to God pledging to give his life to the Lord. Abraham knows that Everest is not the most difficult mount to ascend. The mount of holiness is what he has set his eyes on and aims to achieve it through his loving service to the young as a Salesian Cooperator.