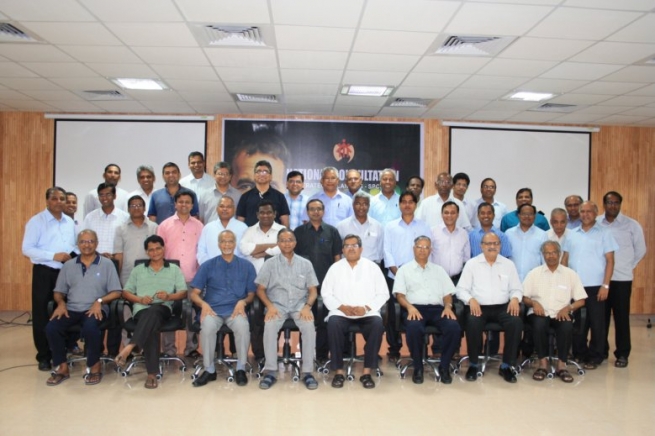 (ANS - Bangalore) - The National Consultation on the Strategic Planning of the Salesians in the South Asia region, organized by the Conference of the Salesian Provincials of the region, was held in Bangalore from 1 to 3 July. It was attended by about 50 people, representatives of the Provinces and Salesian Delegates of the various national networks.

Don Bosco National Network is a network to coordinate Salesian activities throughout the South Asia region. Bearing in mind clearly that the young are always the focus of Salesian activities, the national consultation decided to observe carefully the broader context in which the Salesians and lay people involved in the mission have to operate.

The event opened with Mass at which the Provincial of Bangalore Fr Joyce Francis presided.  Then Fr Noel Maddichetty, new Director of the Salesian Mission Office in New Delhi, read a message from Fr Maria Arokiam Kanaga, Councillor for the South Asia region, who was busy in Rome with the General Council.

During the first day they dealt with the contribution of numerous experts and speakers on topics such as the national situation regarding power, freedom, poverty and secularization; the condition of Dalits, especially in relation to their education, and that of the indigenous tribes; and the rights of women and children. A special session was devoted to the commitment of Don Bosco Tech for vocational training and job placement of the poorest in the Kashmir region.

In successive sessions an analysis was conducted at various levels on the internal and external contexts of the Salesians in South Asia. In particular, the participants studied the Salesian identity and its relevance in the face of current challenges and opportunities. They emphasized the need to plan a new training programme for young people to develop their full potential and grow as citizens and workers; and the importance of being authentic.

At the conclusion Fr Thomas Vattathara, Provincial of Guwahati, thanked all the participating delegations and quoted Pope Francis, saying: "Do not disappoint the aspirations of young people."