RMG – The Minister of Tourism of Malta visits the Rector Major 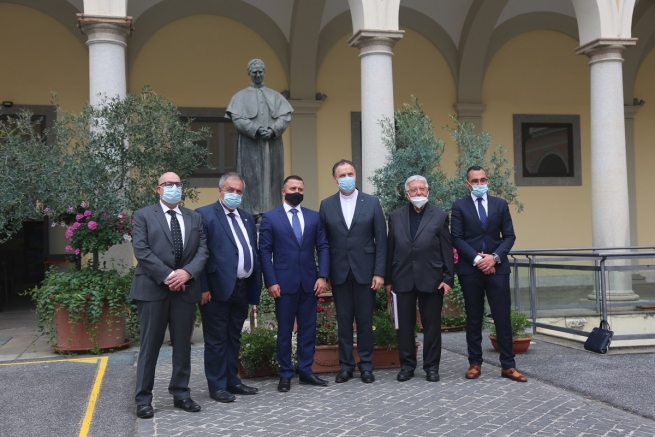 (ANS - Rome) - On Wednesday 23 June 2021, the Rector Major of the Salesians of Don Bosco, Fr Ángel Fernández Artime, received a Maltese delegation at the Salesian Headquarters in Rome: the Minister for Tourism Hon. Clayton Bartolo, dr. Frank Zammit, Ambassador of Malta to the Holy See, the Secretary General of the Ministry of Tourism, dr. Ronald Mizzi, and the Head of Cabinet.

The Minister wished to pay homage to the Rector Major with a volume on sacred art in Malta, entitled Faith, Tradition, Glory. Religious Tourism elements in Malta curated by Joseph Fava and Frank Zammit. The meeting was also attended by Bro. Jean Paul Muller, SDB, General Economer of the Salesian Congregation, and Fr Giuseppe Costa, Secretary-Spokesperson of the Rector Major.

During the cordial meeting, which lasted over an hour, the Maltese Minister highlighted the great commitment the Salesians have at the service of young people in Malta and also expressed his desire to foster the development of school and religious youth tourism.

The Rector Major thanked the delegation for their visit and the homage, and encouraged further commitments; he also invited the Minister to visit the new Don Bosco House Museum in Valdocco, Turin, and also offered the opportunity for an exhibition on Maltese religious tourism. Likewise, the General Economer also proposed the development of initiatives between Salesian schools and youth groups that deal with tourism.