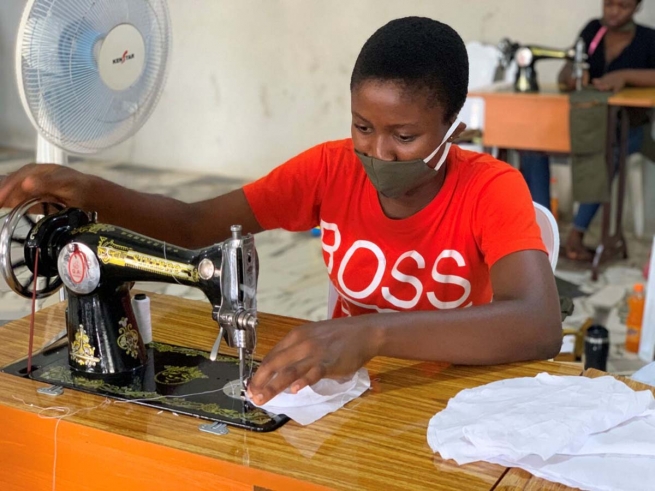 (ANS – Lagos) – Salesian missionaries in Nigeria were able to train 15 girls in tailoring and give them self-employment starter kits thanks in part to funding from Salesian Missions, the U.S. development arm of the Salesians of Don Bosco. The “Post-COVID Relief through the Provision of Skills in Tailoring for Young Girls in Lagos and Ijebu Ode” project ran from November 2020 to April 2021. A new second phase of the project will run until July 2021.

Ten of the girls were from Lagos and five were from Ijebu Ode. While initially only 10 girls were to be trained, the interest in the project was so high that it was expanded to 15. The project also employed 10 trainers who showed proficiency, experience and passion for the field.

Guided by the goal of equipping trainees with skills in tailoring and sewing, the training consisted of 90 percent practical work and 10 percent theory, which also involved life skills training, marketing, management, interpersonal communication and other essential aspects of running a business.

The trainees also completed a one-month internship before being provided with starter kits to help with self-employment to improve their livelihood. They remain under the supervision of the project for another two months for business monitoring and performance assessment and to ensure that their start-up kit tools are being used effectively.

“Salesian missionaries in Nigeria have been able to impact young lives through the delivery of training, education and providing for their basic needs like shelter,” said Father Gus Baek, director of Salesian Missions. “Training girls and young women has remained of pivotal importance to address issues of gender inequality and youth unemployment. Girls who are able to receive an education have an advantage in helping to break the cycle of poverty and live a life of self-sufficiency.”