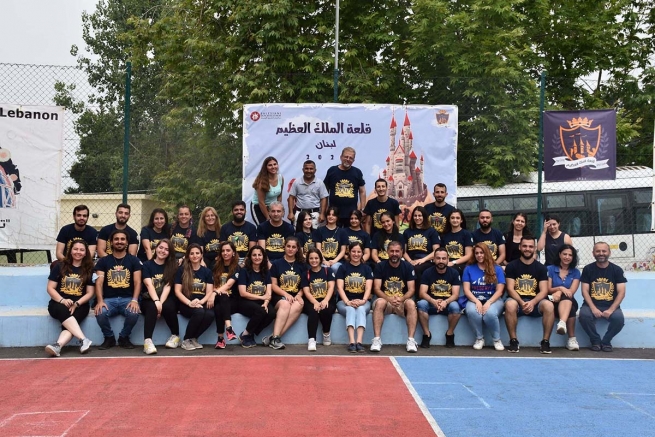 (ANS - El-Houssoun) - Organized by the Salesians in Lebanon, the Youth South Camp in the mountain house of El-Houssoun (Byblos district) is increasingly revealing itself to be an oasis of peace, serenity and conviviality in what is a dramatic social, political and economic context, one that is unprecedented in the centennial history of modern Lebanon.

About 800 boys and girls are involved: Lebanese, Syrian and Iraqi, with dozens of volunteer animators, adequately trained. Syrians and Iraqis are all refugees, residing in Lebanon for several years: Syrians are waiting to be able to return to their country, while Iraqis are waiting to be welcomed in a third country. While the Syrians are all Muslims and the Iraqis Christians, the Lebanese are mixed, but the vast majority are Christians, in accordance with the area's demographics and live within a radius of 10-15 km from the Salesian center. Syrian children also reside in the area; Iraqis, on the other hand, reside in the suburbs of Beirut, more than 40 km away. For all of them, transportation is guaranteed, as well as the daily distribution of a sandwich and refreshments.

Never had the Salesian house in El-Houssoun known such a crowded Summer Camp, even if the daily attendance is divided into the days of the week according to the nationality and age of the participants (from 6 to 15 years).

A collective or group educational and recreational program forms the core, flanked by moments of free playful activities, especially sports.

“It's impressive to see the joy that shines on the faces of children and adolescents and the enthusiasm they put into participating in the various activities offered,” they write from the Oratory. “Even Muslim girls who wear the veil put aside their traditional reserve to leave involve the atmosphere that surrounds them,” they add. All this strongly contrasts with the climate currently dominant in the country: mistrust, poverty and, not infrequently, misery, unemployment, galloping devaluation of the Lebanese pound, instability and sometimes insecurity, lack of basic products, medicines and the most basic social services. From day to day, in a crisis that has lasted for two years, aggravated by the terrible explosion in the port of Beirut (4 August 2020), there is no glimmer of light.

Sowing joy, trust and giving hope, as well as providing concrete help, remains the primary objective of and for the children of Don Bosco in the current situation in Lebanon. The day is expected when the light shall eventually triumph and then Lebanon will once again become the "message country" described by Pope Saint John Paul II.