Belarus - Fr Á.F. Artime: "We now have the task of speaking about Jesus!" 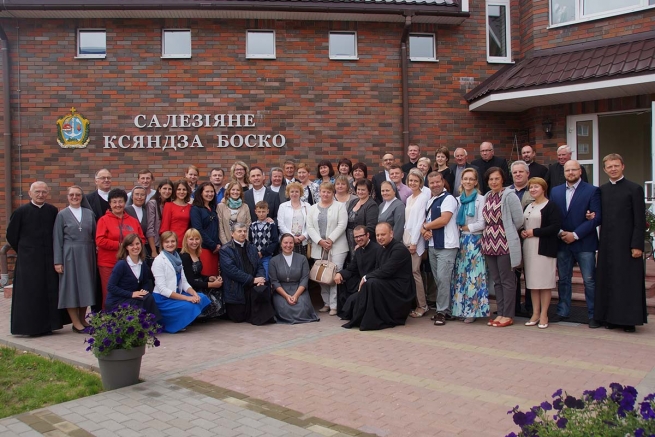 (ANS - Minsk) - The Rector Major arrived in Minsk on the evening of Friday 8 July for his visit to Belarus. He then went to the town of Borovlyany, where he celebrated Mass with his confreres on Saturday morning. During the Mass he said that priests should be first of all apostles and that they should preach as sons of Jesus. "Now we have the task of speaking about Jesus, really speaking about Jesus!"

The Rector Major was accompanied by Fr Tadeusz Rozmus, Councillor for the Central and Northern Europe Region, and Fr Horacio López, Secretary of the Rector Major. On Saturday morning they met the Council of the Delegation of Belarus together with the Superior and the Secretary of the Province of Warsaw – the province to which the Salesians in Belarus belong – and discussed with them the local situation, successes, strengths, challenges and opportunities for pastoral work.

He was subsequently received by the Metropolitan of Minsk-Mogilev, Archbishop Tadeusz Kondrusiewicz, and his Auxiliary, Bishop Alexander Yashevsky, SDB. The Metropolitan expressed gratitude for the work done by the Salesians, especially for the revival of Catholic institutions, and expressed hope for a fruitful future collaboration.

In the afternoon the visit continued to the Museum Park of Belarus called Manor Estate - Sula, where Fr Á.F. Artime learned more about the history, nature and local culture and tradition.

On Sunday morning the Rector Major met with the local Salesian Family and shared his experience on the five continents, where he saw how the Salesian charism is able to change people's lives.

In the afternoon, in Minsk, the tenth successor of Don Bosco presided over the celebrations for the Unity Day of the Salesian Family: first, along with Archbishop Kondrusiewicz and Bishop Yashevsky, the Rector Major officiated at the Eucharist in the church dedicated to Don Bosco; then he took part in the festive program, with games, shows, singing and dancing. The evening ended with a dialogue between young people and the Rector Major.