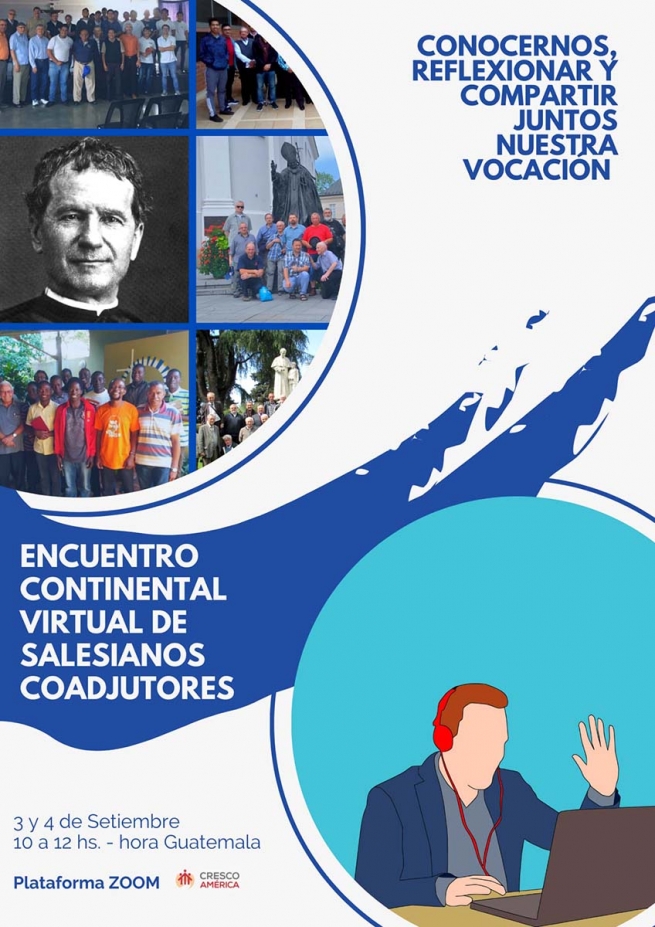 (ANS - Guatemala City) - The 1st Virtual Continental Meeting of the Salesian Brothers of America took place on 3 and 4 September, 2021. The initiative was organized and implemented by the “CRESCO-America” Salesian community, the house where the young Salesian brothers from the America South Cone and Interamerica regions live their experience of specific formation.

The meeting was attended by Salesian Brothers from all the Salesian Provinces of the continent, as well as some Brothers from "Casa Zatti", the Formation Center for Salesian Brothers in Europe, together with Salesian priests, such as Fr Gabriel Romero, Councilor for the America South Cone Region; Fr Eduardo Castro, the first director of CRESCO; Fr Juan Antonio Suriel, the current Director; Fr Nivaldo Pessinatti, Provincial of Brazil-Recife (BRE), and Fr Paco Santos, of the Formation Sector. There were almost 100 religious, aged 19 to 88, from those with as little as two weeks to as many as 44 years since their first profession.

The methodology of the meeting included two sessions of two hours each for two days, including a report by experts and an assembly discussion. Fr Ivo Coelho, General Councilor for Formation, and Bro. Domenico Duc Nam Nguyen, Delegate of the Rector Major for the Salesian Cooperators and the Past Pupils of Don Bosco, were among the speakers present.

Specifically, the General Councilor for Formation spoke of three particular areas: formation in mission, as continuous ongoing growth, and which requires presence among the young; pastoral accompaniment and ways to promote the leadership of young people, also taking into account newer trends like ecological conversion, the digital world and the participation of young Salesians in the renewal of formation, to give impetus to "synodal" formation. Finally, the consecrated Salesian identity, was also highlighted in the two forms in which it is expressed, lay and priestly, and also emphasizing attention to the core of the charismatic dimension.

Bro. Duc Nam Nguyen spoke of complementarity in the Salesian mission with a look at the sixth programmatic proposal of the Rector Major: “TOGETHER WITH THE LAITY IN MISSION AND FORMATION, the charismatic strength offered to us by the laity and the Salesian Family”. He recalled how "From the very beginning, our Founder took care to involve as many collaborators as possible in his operational project."

He then emphasized that Pope Francis himself, in handing over to the Salesians the mandate to live "the Valdocco Option", spoke "of two presences that constitute an 'antidote' against every clerical and rigorist tendency: the Salesian Coadjutor and the women."

Finally, he suggested on the need for  “creativity” to deal with the situations generated by the pandemic with evermore intelligence and generosity; a "concrete solidarity" with the most needy; a "profound spirit of faith" -convinced that God draws near and accompanies his children.

Commenting on the meeting, Fr Coelho praised the interactive dynamics and the shared Salesian spirit: "When Salesian brothers get together, they release so much good energy"; and he hoped that in the future a similar meeting could be held in presence.