Russia – 30 years of Salesian presence in the country celebrated 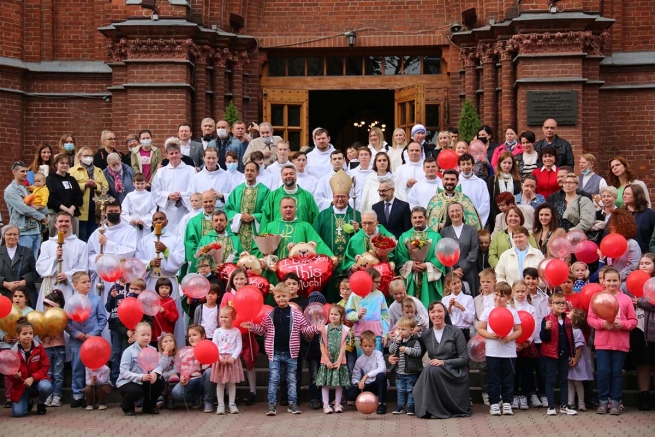 (ANS - Moscow) - The Salesians in Russia celebrated the 30th anniversary of their presence in the country on Sunday 12 September, 2021. The anniversary was celebrated with a Eucharist, well attended by the faithful and the friends of the Salesian house, at the Cathedral of the Immaculate Conception of the Blessed Virgin Mary in Moscow.

The Salesians began their service in the Russian capital in 1991, after being invited by Msgr. Tadeusz Kondrusiewicz, apostolic administrator for all of European Russia at the time. He "knew their experience, fidelity and their ability to fight all odds," Msgr. Paolo Pezzi, the Archbishop of the "Mother of God" archdiocese of Moscow, emphasized in his homily on Sunday 12 September.

“We thank the Salesian Congregation for having accepted this -not only difficult, but hard service,” continued the prelate. In fact, at that time, after 70 years of persecution of the Catholic Church by the Soviet regime, there was a lack of clergy to renew ecclesial structures and restore religious life, and hence, the task entrusted to the Salesians was truly pioneering.

For the first 26 years, from 1991 to 2017, the parish priest of the cathedral was Fr Jozef Zaniewski, who was then succeeded by Fr Vladimir Kabak, who currently holds the office. In addition to the pastoral care of the Cathedral and parish of the Immaculate Conception, the Salesians in Moscow also run a care home where they accommodate about thirty children in need, and a hospitality center that they make available for retreats, recollections, and various formative meetings.

After setting foot in Moscow, the Salesian presence on Russian soil has expanded over the years: today, the Sons of Don Bosco have other presences in Gatchina, near Saint-Petersburg; in Rostov-on-Don; and in Sochi - all works belonging to the Poland-Pila Province (PLN); while in the Republic of Yakutia, in the Siberian area of ​​the country, there are the two missionary outposts of Yakutsk and Aldan, which belong to the Slovak Province (SLK).

During the Mass, in addition to expressing gratitude to the Salesians who continue to carry out their apostolic work in this land, a moment of thanksgiving was also made to commemorate some deceased Salesians who served the Russian: Fr Thomas Donaghy (1933-2010) and Fr Henryk Boguszewski (1946-2019).

At the end of the celebration, hundreds of people waited outside the Cathedral to greet the Salesians and to thank God for their thirty years of service as true witnesses of Christ and the faithful children of Don Bosco.