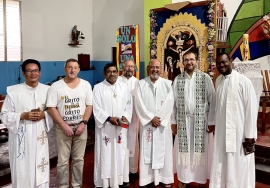 (ANS – Lima) – "One of the updated expressions of the Salesian charism is to make visible the challenge and beauty of communion. It is Jesus who calls each of us, from our different realities and personal histories, to form in his name a community that manifests God's Trinitarian love to young people". This is what Fr Hugo Orozco, SDB, Councillor for the Interamerica Region, shared in a reflection arising out of the Extraordinary Visit that he is carrying out, on behalf of the Rector Major, Fr Ángel Fernández Artime, to the Salesian houses of the Province of Peru. Here is his report:

"The Holy Spirit and the availability of the individual make unity possible in the midst of diversity: this is the beautiful testimony that the community St. Lawrence of the Salesians of Don Bosco in the Peruvian Amazon are cultivating to make god's love manifest to the different ethnic groups that serve in the Vicariate of Yarimaguas. Together with the laity engaged as pastoral agents and four other communities of life religious who share the missionary apostolate, such as: the Missionary Society of Jesus, of Spanish origin; the Laurentana Missionaries of Colombian origin; the Sisters of St. Joseph of Cluny of French origin, and the Secular institute of the Disciples of Indian origin the missionary work carries on.

The Salesian presence itself is composed of confreres from four continents: America, Europe, Africa and Asia, and is committed to accompanying seven indigenous ethnic groups on a territory of more than 30,000 square kilometers. Fr Józef  Kamza and  Fr  Roman Olesinski  come  from Poland; Fr Alberto Niquen from Peru; the Salesian Brother José Gallego is originally from  Spain; Fr Fidélius Adjanohoun  comes from Benin and Fr Tien Nguyen Huu  arrived from Vietnam. All together they form a missionary community that accompanies the Achuar, Wampis, Awajun, Kandozi, Chapra, Shawi and Kichwa ethnic groups, as well as the mestizo populations.

This is an opportunity to live and realize  that  synodality  to which  as a Church we are called to bear witness, to walk together as an expression of communion".