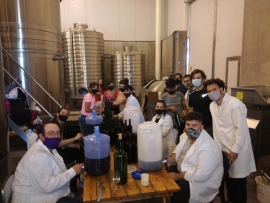 (ANS - Rodeo del Medio) - The Salesian house in Rodeo del Medio plays an important role in the history of the Argentine national wine industry, and beyond. 120 years after the production of the first bottle of Mass wine, this center that today is academically dependent on the Catholic University of Cuyo Salesiano continues to do the two things it does best: educate young people, including many authorities in the world of oenology, and produce excellent wines.

The superiors subsequently appointed the permanent staff, including Fr Paolo Robotti and the coadjutor Ernesto Frigerio. In 1901, lessons in viticulture and enology began in the “Don Bosco” school and the experimental cellar began to be built on the basis of the pre-existing cellar, which had been donated. 17 April of that same year, then, remains marked as a historical date, because the first Mass wine was filtered.

But there’s more: also in 1901 the construction of the Shrine dedicated to Mary Help of Christians began, the work of the famous Salesian architect Fr Ernesto Vespignani, which would then be opened later in 1909; in 1916 it would become a parish and in 1998 it was recognized as a cultural, architectural, historical and religious patrimony of the department of Maipú, Mendoza.

In 1905, the first workshop was created in a room measuring 4 by 8 meters, with a wooden table, running water and lighting with paraffin lamps. Starting from the 1930s, the school expanded to the teaching of cultivation of olives, and over the years the whole Salesian work grew: in terms of buildings, in the number of students, and also in the constant renewal of the syllabus and prestige.

Another milestone was set in 1965 with the creation of the first Faculty of Oenology in Latin America, inaugurated in the presence of the then President of the Republic, Arturo Illia, and of which Fr Francisco Oreglia, one of the main representatives of the Argentine viticulture of all times, was the principal promoter.

In 1968 the “Wine Tower” was inaugurated, designed to respond to a phase of expansion of the wine industry, with large volumes of growth and an increase in per capita consumption.

Also, aware of the needs of the society in terms of education, the work has expanded its levels and the degree of professionalization with the creation, in 1983, of the Tertiary Level, which allows students to graduate with theoretical and practical training to enter as key players in the labor market.

And a new and modern winemaking plant was inaugurated in 2007, updating the entire School-Cellar complex to new technologies; and - most important of all - all this productive cultural resource is placed at the service of the students' education.

Numerous oenologists have graduated from this center and now work in many parts of the country and the world. And many more are the young people who in its rich cultivated lands have learned the value of work and respect for nature.