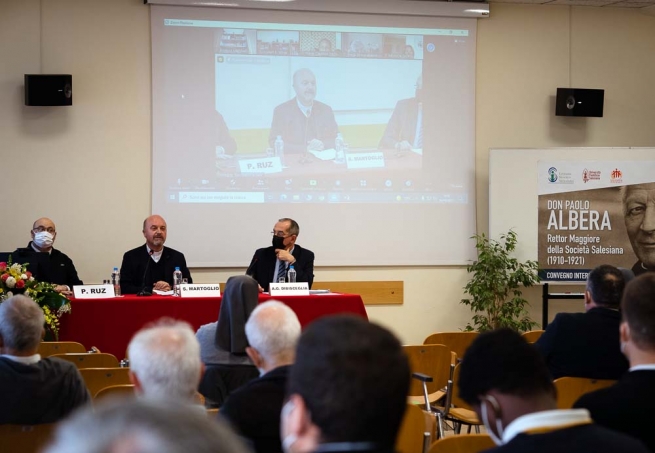 (ANS - Rome) - The two days, 30-31 October 2021 - of the International Conference dedicated to Rector Major Fr Paolo Albera on the first centenary of his death (29 October 1921) was held in precise manner as planned. Organized by the Salesian Historical Institute – the Istituto Storico Salesiano (ISS) - at the Salesian Pontifical University (UPS), the conference was promoted by the current Rector Major Fr Ángel Fernández Artime.

The reports of the first day analyzed the operational guidelines and the results of the governing action of Fr Albera as Rector Major with a look also at the historical period he lived and on the progress of the Salesian houses in America that he visited at the beginning of the century.

In conclusion, space was given to the indication of the sources of and about Fr Albera preserved in the Salesian Central Archives (ASC), after an interesting comparison between some photographs of Don Bosco and Fr Albera.

The sessions, moderated by Profs. Angelo Giuseppe Dibisceglia and Maria Lupi, were preceded by the welcome address of the Vicar of the Rector Major, Fr Stefano Martoglio, and concluded by those of the Rector Magnifico of the UPS, Prof. Fr Andrea Bozzolo.

The detailed and careful conclusion of the work held by the well-known historian and professor emeritus of the "Roma Tre" University, Prof. Andrea Riccardi, the founder of the Community of Sant’Egidio, was also especially appreciated.

The live streaming also offered English translations of all the interventions. The entire program, already visible on YouTube (first day - second day), will soon also be available in in print shortly.