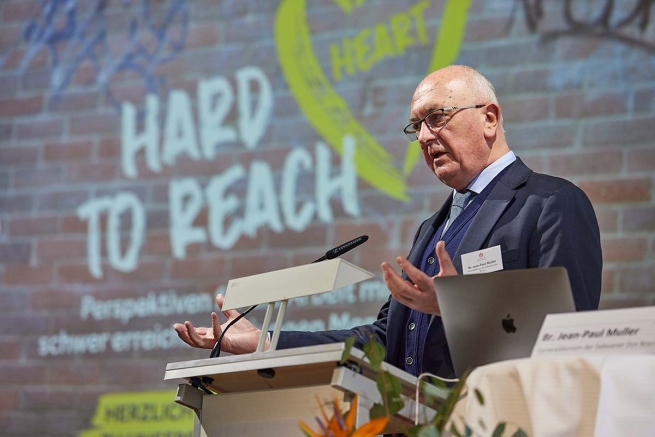 (ANS – Munich) – During a symposium, on October 28, with the participation of the Bavarian State Minister for Family, Labour and Social Affairs, Carolina Trautner, as well as experts from science and practice, the Salesians of Don Bosco in Munich draw attention to the accessibility of “disconnected” and hard-to-reach young people. According to estimates, more than 480,000 adolescents and young adults between the ages of 14 and 25 are currently not in employment, school or training in Germany. State and social institutions often do not reach them.

As Dr. Andreas Kirchner, professor of theories and methods of social work, explained in his keynote address: our social systems are often characterized by a very simple “input-output logic.” “This is based on the idea that there is a concrete input in the form of an offer or a service. And we expect a certain output but, find that it just doesn't work that way with this target group with difficulty in accessibility,” explained the scientist from the Katholische Stiftungshochschule München.

“Hard to reach” refers, on the one hand, to young people who no longer want to have anything to do with the social systems, for example, because of bad experiences. “On the other hand, however, I would say that job offers and the service providers themselves are also in part hard to reach,” he made clear. Low-threshold access to programs is therefore important.

Bavarian Youth Minister Carolina Trautner emphasized the importance of the symposium. “We have to keep an eye on young people who are hard to reach and accompany them on their individual path to adulthood; show them how enriching it is to take responsibility for one's own life and to contribute to our society as a valuable member,” she said. “I have the utmost respect for what those involved do every day for the well-being of young people, for parents, families and for our entire society.”

Economer General of Salesian Congregation, Br Jean-Paul Muller SDB, drew attention to disengaged youth worldwide and the social and individual responsibility for them. If each individual is open to young people in difficult situations, then “the net into which these young people can fall becomes larger,” he encouraged. “Once we are in contact, everything else arises little by little. Put simply, it will remain that these young people, who can't be forced into any of our frameworks, will simply be empowered through a relationship, to perceive their environment similarl to how we do.”

At the subsequent panel discussion, which included Br Jean Paul Muller, Carolina Trautner and Dr. Andreas Kirchner, as well as Wilfried Hüntelmann, the chairman of the management board of the Munich Employment Agency, and Fr Christian Vahlhaus SDB, the vice provincial of the Salesians of Don Bosco in Germany, agreed that the lack of a stable, long-term financing concepts makes working with the target group more difficult. “For the young people and also for the employees, it would be much more helpful to have longer perspectives,” clarified Fr Vahlhaus. It is an important challenge “to ensure that we come to solutions that provide help beyond a short period of time,” said the Salesian, who is responsible for the 26 institutions of his Salesian province in Germany.

In workshops that followed, social workers and academics provided further insights into empiricism and practice. Experiences from the work in the facilities of the Salesians of Don Bosco and resulting calls for action were incorporated. The Salesians have 7 institutes to take care of the “disconnected” or disoriented young people in Germany.

The care for disadvantaged children and young people has always been the core task and competence of the Salesians of Don Bosco. On the basis of the Christian concept of humanity, it is self-evident for them that no person may be excluded from social participation. Fr Christian Vahlhaus therefore concluded the panel discussion with the admonition that young people who have become disengaged must not be lost from view and that new forms of cooperation are needed. It is the joint task of all those involved to observe “how we have to change and how we can also achieve good things together in order to help young people.”

The book “Prekäre Positionen” (Precarious Positions) by Dr. Andreas Kirchner provides an empirical basis for reflecting on the pedagogical-pastoral activities. In it, he explains the framework concept for working with hard-to-reach young people in institutions of the Salesians of Don Bosco. His interest in the book focuses on the question of how help can be better coordinated so that children and young people do not fall out of the programs, as is often the case in practice.

The Salesians of Don Bosco’s manifesto: “Schwer erreichbar – Perspektiven für die Arbeit mit jungen Menschen am Rande” (German) as well as further information on working with the target group of hard to reach young people can be found at: www.donbosco.de/hard (German).