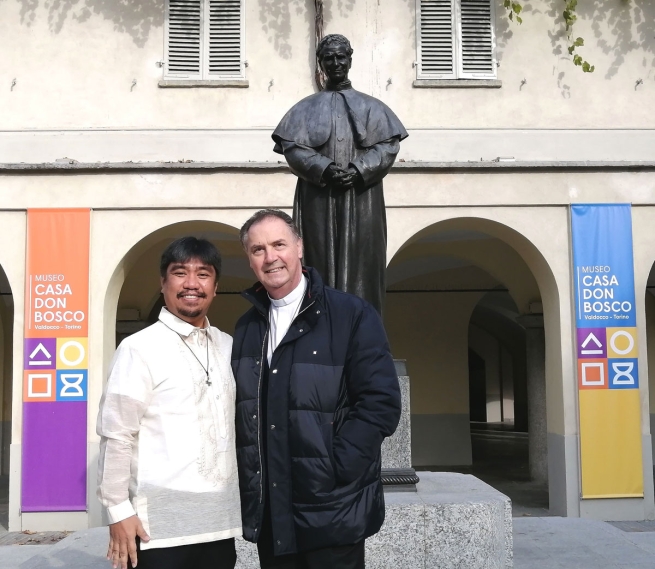 (ANS - Rome) - Is it possible that the flame of the missionary vocation is lit during a Mass, attending the episcopal ordination of a confrere, listening to songs whose meaning is not even understood? But it seems so -as confirmed by Fr Jose Armando G. Cortez, a 50-year-old Filipino Salesian. 4 years ago he was representing his Province (of Northern Philippines), at the ordination of Fr Pedro Baquero SDB as the bishop of Kerema, Papua New Guinea where he felt moved. After a serious discernment, he conveyed his availability for the missions last Sunday, November 21, at Valdocco and received the missionary mandate from the Rector Major, Fr Ángel Fernández Artime.

Did you choose the destination or was it assigned to you? Are you happy with it?

I put my complete trust in our Superiors in their discernment about the place where I would go. After a few weeks of waiting, I learned that I was destined for Argentine - Patagonia. What I know is that God is asking me to give some more of my life to Him. As to where, I leave it in His grace.

How did the people close to you face your missionary choice?

Do you have any doubts or fears about the new culture, the new reality…?

My only concern, as I told the Rector in my letter, is the language. I also told him that God will bring me suitable companions and put us in a place where we will be safe. I know that this will help me grow in my following the Lord.

What projects or dreams do you have for your mission?

I open myself to what Providence will lead me. I'll give it my all, however difficult it may be. It will be a small price for the innumerable graces I have received my whole life.

Do you have missionary role models that you want to imitate?

I am grateful to all the Salesian missionaries who have worked and died in our Province. I got to know some of them during my formation. I am thinking, for example, of Father Maurilio Candusso, who even though he never learned the language well, was nevertheless much loved by the oratory boys because they felt his love and genuine concern for all of them. May I be like all these fine models, who have given everything till the end. Even their bodies lie in the land of their beloved mission country.

Missionary life is above all evangelization and pastoral zeal for souls. What do you think about it?

I believe my past experiences in the different houses I was assigned to and the different roles I was asked to perform will help me a lot. But, I am also preparing for what is to come. I shall work on inculturation and on being one with the people. And, of course, I will also grow in my prayer life, spiritual accompaniment, and inculturized Salesianity.

Do you want to send a message to your confreres or to the young people?

I say to my brothers that if we are a "missionary congregation" according to Don Bosco and our Constitutions, being invited by the Lord must not be foreign to us. My message to young people is not to be afraid to give of themselves in the service of others. In any little act of self-giving they will be able to see and feel the hand of God leading them to a journey.