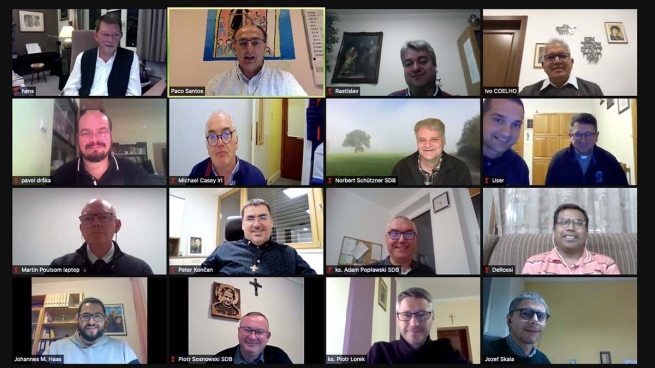 (ANS - Rome) - The annual meeting of the Regional Commission for Formation of the Salesian Region of Central and Northern Europe took place online from 22 to 25 November. The Delegates for Formation of the Provinces of this Region met online with the Sector’s General Councilor, Fr Ivo Coelho, and the Formation Department staff, for session which, in addition to developing the specific themes of the planned proposals, represented an excellent opportunity to foster the bonds between the Delegates and heightened the sense of belonging and union with the Congregation, the Rector Major, the current General Councilor, and his team.

This year the meeting focused on the figure of the Formator, the Formation Team, the role of the Curatorium, and the concrete realities and situations of Formation in various Provinces.

During the sessions, the participants got a chance to better understand the formation of young Salesians as an important and highly responsible task. They recognized it as one that which requires well prepared and capable religious who can carry out this service in a spirit of collaboration and co-responsibility.

Sentiments of Gratitude were conveyed to the Delegates for their service to the Salesian Formation. It was vocalized by, especially by the Vicar of the Rector Major, Fr Stefano Martoglio, during his speech via Zoom.

Special thanks was also rendered to Fr Jozef Skala, of the Slovak Province (SLK) for his service as Regional Coordinator of the Commission over the past three years. Fr Peter Končan, from the Province of Slovenia (SLO), was nominated as his successor. Fr Johannes Haas, of the Austrian Province, (AUS) was also proposed as the Deputy-Coordinator and Secretary.

The Provincials of the Region confirmed both appointments (Coordinator: Fr Končan; Deputy Coordinator and Secretary: Fr Haas), for the next three years, according to the Commission’s regulation.

With this meeting held last week, the Formation Sector completed its cycle of Meetings of the Regional Commissions for 2021.