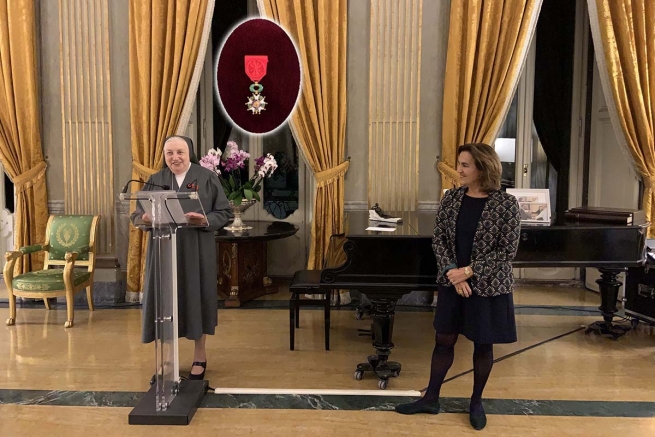 (ANS – Rome) – On 30 November 2021, in Rome, at Villa Bonaparte, seat of the French Embassy to the Holy See, the special ceremony for the awarding of the Medal of Officer of the Legion of Honor of the French Republic to Sr. Yvonne Reungoat, Mother General Emeritus of the Institute of the Daughters of Mary Help of Christians, founded on 5 August 1872 by St. John Bosco and St. Maria Domenica Mazzarello in Italy and present in France since 1877.

Present at the ceremony were the Mother General of the FMA Institute, Mother Chiara Cazzuola and some General Councilors; the brother and sister-in-law of Sr. Yvonne Reungoat; the Vicar of the Salesians of Don Bosco, Fr. Stefano Martoglio; the World Coordinator of the Salesian Cooperators; the Vice -president of the FMA Past Pupils, prof. Andrea Riccardi Founder of the Community of Saint Egidio; Sr. Nathalie Becquart, Under Secretary of the Synod of Bishops; representatives of the Congregation for Institutes of Religious Life and Societies of Apostolic Life; of the International Union of Superiors General (UISG) and of the Union Major Superiors of Italy (USMI); the Provincial of Notre-Dame des Nations France-Southern Belgium Province, Sr. Marie-Agnès Chetcuti and Sr. Chantal Fert representing the FMA of France, the Animator of the community of the Generalate, Sr. Carla Castellino and some sisters of the same community; the Provincial of St. John Bosco Province (IRO); the Vice-Dean of the Pontifical Faculty of Educational Sciences «Auxilium»; the Vicar of the Preprovince of Mary Mother of the Church (RMC); and the two French novices.

The Award was presented by Her Excellency the Ambassador of France to the Holy See Mrs. Elisabeth Beton Delègue who related her joy and satisfaction in expressing the gratitude and homage of the French nation to Mother Yvonne Reungoat, for her commitment and for the mission she carries out at the service of the education of the poorest young people in many countries, with all the Sisters of the Institute of the Daughters of Mary Help of Christians, Salesians of Don Bosco. She said she was particularly happy, because she had the opportunity to get to know the Daughters of Mary Help of Christians and their mission during her long diplomatic career, especially in Haiti and Madagascar.

Mother Yvonne Reungoat, addressed those present as follows, “I thank the Ambassador for this great and delicate attention which reveals her sensitivity for the promotion and empowerment of women and of consecrated women, recognizing her specific place in society. I wish to dedicate this Decoration to all the consecrated women of the world who, by giving their life to God, put it at the service of the poorest, the most disadvantaged, the discarded. They are often present in the most isolated corners of the earth, where poverty in all its forms is extreme, where violence daily rages and kills many innocent women and children, where daring to manifest one’s faith means risking one’s life. They choose to remain in the midst of their people, sharing their suffering, being a simple presence that becomes closeness, trying to turn on a small light that sustains hope when darkness seems to invade the horizon. Love, expressed in daily gestures of proximity, listening, sharing, is a source of new life.”

Sr. Yvonne Reungoat, already a Knight of the Legion of Honor since 5 July 2012, was promoted Officer of the Legion of Honor on 1 January 2021. The decree of appointment reports the following motivation: “For more than a year now, the entire French population, and that of the many countries in the world, found themselves facing the serious health crisis of Covid-19, with great consequences on a humanitarian, educational, and social level. Many citizens have committed themselves professionally and voluntarily, in the fight against the virus, at all levels and in all sectors of activity”.

Mother Yvonne always accompanied the FMA and Educating Communities, urging them to “carry out small and daily gestures of fraternal charity, to be in solidarity with the poorest, the forgotten, the excluded, to strengthen communion, to trust in God the Father, Teacher and Lord of life, and to be foci of hope and light wherever the Salesian mission calls us” (Message 11 March 2020).

The Legion of Honor is the highest instituted after the French Revolution. Currently it rewards, according to different degrees, the eminent merits acquired in the service to the Nation. It is a knightly order established on 19 May 1802 by Napoleon Bonaparte.

The FMA Institute has gratefully welcomed the appointment conferred on Mother Yvonne by the French Republic, which will have its positive repercussions not only in France, but throughout the Salesian world committed to transmitting the values of the Gospel to young people, so as to build through education, an ever more human future, more supportive, and more just, because it is full of hope.

Sr. Yvonne Reungoat was born on 14 January 1945 in Plouénan in France. She began her formation in Salesian religious life in Paris, where she was admitted to the Postulancy in 1963. After the Novitiate in Lieusaint (France) and Casanova di Carmagnola (Turin), she made her Religious Profession as an FMA on 5 August 1965. Graduated in Literature-History -Geography at the University of Lyon in France, she teaches until 1980, then she is Community Animator in Lyon, Paris, (1977-1983), Provincial Vicar (1978 – 1983), and Provincial in Paris (1983-1989). In that period she also accompanied the development of the presence of the FMA in Gabon in Port Gentil, a house opened in 1971, and later flanked by other communities: Oyem and Libreville. Since then, Sr. Yvonne has felt challenged by the missionary mandate of Jesus, “Go into the whole world to proclaim the Gospel“. Her missionary vocation matured over time and found confirmation in the request of Mother Marinella Castagno, then Mother General, to go to Lomé in Togo, as Delegate of the Provincials of Spain and France to coordinate the first communities of Project Africa. Mother Yvonne spreads the joy of being an FMA and of giving her life for the proclamation of the Gospel especially to the little ones, the poor, and women.

In 1991 she was appointed Superior of the new Preprovince of West Africa Mother of God based in Lomé (Togo), which at that time included five nations: Togo, Ivory Coast, Mali, Gabon, Equatorial Guinea. Subsequently, the communities of Benin and Cameron will open. On 5 August 1992 she was appointed Provincial of the new Mother of God Province. During her service of animation she privileges a cordial and formative relationship with the sisters, the accompaniment of young women in formation, and the opening of communities in which to welcome them and prepare them for the mission, the formation of animators and local councils, the creative promotion of works for the education of children, the poorest young people and women, collaboration with the various groups of the Salesian Family. In 1996 she was elected Visiting General Councilor and in 2002 Vicar General. She was Mother General in 2008 and in 2014 she was elected for a second sexennium.

Mother Yvonne is the 9th Superior General of the Institute of the Daughters of Mary Help of Christians. Since 2018 she has been President of the Union of Major Superiors of Italy (USMI) and since 2019 she has been a member of the Congregation for Consecrated Life and the Societies of Apostolic Life. In 2014 she was elected for a second six-year term.

To date, the Institute has 11,535 FMA in 97 nations on 5 continents. The Daughters of Mary Help of Christians, consecrated to God to serve Jesus Christ in community, together with the laity and young people, dedicate their lives to the human, Christian, and Salesian education of boys and girls. Don Bosco chose Mary, the Help of Christians as their protector. She knew how to embody and live the pedagogy of caring, which makes their educational passion for young people concrete and makes them women generative of life in the heart of Contemporaneity.