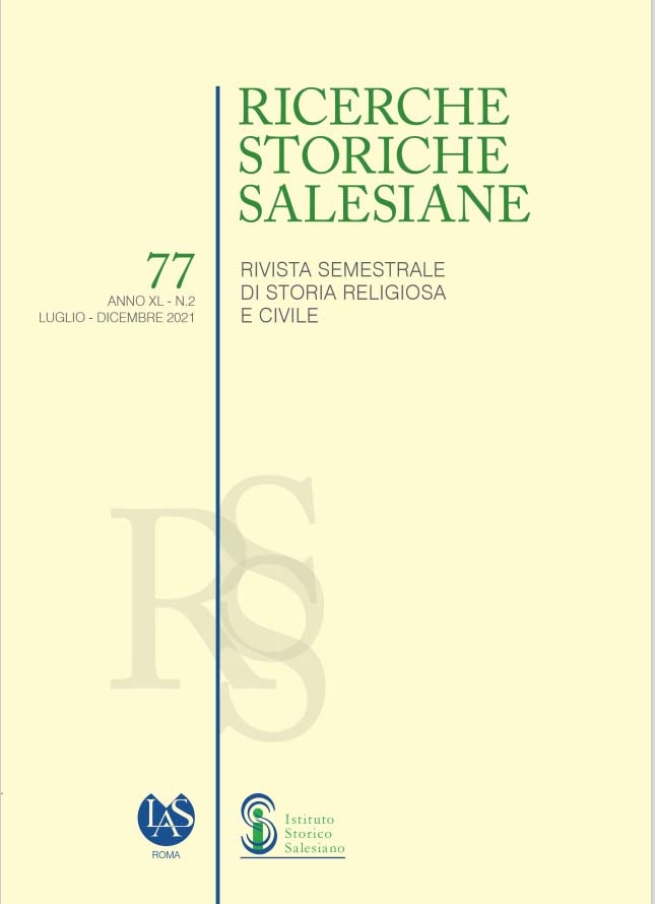 (ANS - Rome) - Issue 77 (July-December 2021) of "Ricerche Storiche Salesiane" (RSS), the bimonthly magazine of religious and civil history, published by the Istituto Storico Salesiano (ISS), has been published. In this second publication of 2021 - the year which was dedicated to Fr Paolo Albera, due to the centenary of his death - all three essays are dedicated to the figure of the Second Successor of Don Bosco.

The second article, also in Italian, Orientamenti di vita spirituale nelle circolari di don Paolo Albera ai salesiani soldati durante la Grande Guerra (Orientations of spiritual life in Fr Paolo Albera’s notes to Salesian soldiers during the Great War) is by Fr Aldo Giraudo; it analyzes the 32 monthly letters sent between 19 March 1916 and 24 December 1918 by Fr Paolo Albera to the Salesians called to arms during the First World War. The letters were intended to support the morale of the Salesians and nourish their sense of belonging, reformulating, in the new scenarios, the characterizing traits of their own vocational identity. They are also a reflection of the superior's soul and spotlight his perception of events, his sensitivity and faith, his convictions and concerns, his vision of the Salesian mission.

In the last article of this sector, Fr Morand Wirth investigates, in Italian, Salesiani soldati durante la Grande Guerra secondo le lettere francesi a Don Albera (Salesian soldiers during the Great War according to the French letters to Fr Albera). The Central Archive of the Salesian Congregation holds one or more letters addressed to the Rector Major Fr Albera from about forty French and Belgian confreres mobilized during the First World War. They testify to a relationship of trust with Fr Albera, the first Provincial of France, from 1881 to 1892, and recount the unprecedented and often high-risk situation they were experiencing.

In the SOURCES sector, the critical edition of the Italian text Relazione di don Paolo Albera a don Domenico Belmonte sul primo viaggio di don Michele Rua in Palestina (report by Fr Paolo Albera to Fr Domenico Belmonte on Fr Michele Rua's first trip to Palestine, 1895), also edited by Fr Aldo Giraudo, is presented. The report of the trip contains numerous details and personal impressions of the Second Successor of Don Bosco; in this way, it is possible to know in detail the situation of the time of the three communities of Bethlehem, Cremisan, Beitgemal - founded by canon Antonio Belloni and passed on to the Salesian Society in 1891 with their founder and some of his brothers; it also explores the historical and geographical environment of that context and illustrates the sensitivity and vision of Father Albera.

The issue is completed by the essay received in the PROFILES sector by Hendry Selvaraj Dominic, and relating to Ignacy Muttu (1879-1967): the First Indian Salesian Priest (essay in English); the contributions of the NOTE sector of Fr Thomas Anchukandam (The “Kerala Element” in the Growth and Spread of the Salesian Congregation in India (in English); and Fr Francesco Motto’s Forme di comunicazione interpersonale e sociale nella Valdocco di Don Bosco (Forms of interpersonal and social communication in Don Bosco's Valdocco); and, as always, the reviews on topics relating to Salesian figures and activities as well as Book recommendations in Segnalazioni.