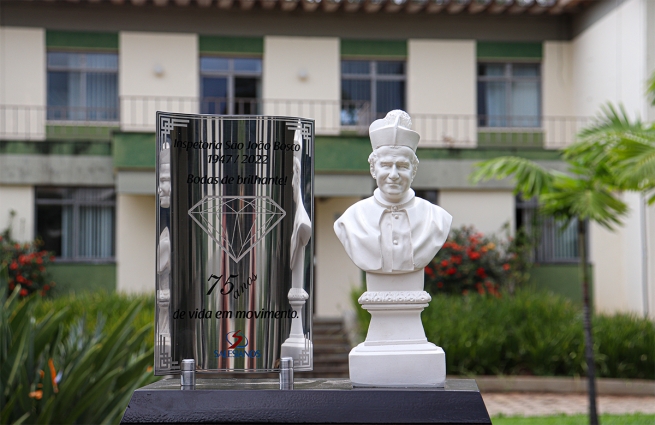 (ANS - Belo Horizonte) – This year the "St John Bosco" Province of Brazil-Belo Horizonte (BBH) celebrates 75 years of its existence. "We want to celebrate and give thanks to God and to the many Salesian and lay consecrated people who have allowed us to get to this point," wrote the Provincial, Fr Natale Vitali, in his message for the occasion.

The Provincial continues in his letter: "The Judeo-Christian tradition remembers the Jubilee as a time of joy; literally, of jubilation. But it is not only this [...] It was as if, with each jubilee year, history could start all over again, and the old errors having been erased, everyone had the possibility of resuming the journey, perhaps with more firm and decisive steps. Hence the jubilation [...] The 75th anniversary is therefore an opportunity and a favorable moment to reexamine the roots of our history and draw from it the strength and vigor of the beginnings. And it is also an opportunity to check the compass and see in which direction we are heading in the midst of this pandemic."

For this important anniversary, the BBH Province has promoted many initiatives:

- a Cultural Competition for the selection of the anniversary logo. In the end, among the 55 received, the most voted through the Province website was the work of Artur Cecílio Albuquerque, a student of the "São Domingos Sávio" Salesian School in Brasilia;

- a commemorative-celebratory prayer to praise and thank God for the Province, and which all the educative-pastoral communities are invited to pray, in a special way, on the 22nd of the month;

- a commemorative-celebratory hymn with words and music by Fr Geraldo Martins Lisboa, SDB, played and arranged by the Music Band of the "Santa Rosa" Salesian Institute in Niterói, and with a choir of Salesian educators and Salesians in-formation of the "Bittencourt" and “Lisboa” choirs of Pará de Minas;

- a commemorative-celebratory symbol in the form of a wave-shaped stainless steel plate, which symbolizes the Salesian charism, and which will go on pilgrimage in the presences of the Province from March to December 2022;

- and, finally, a commemorative-celebratory event on 25 August 2022 with a Holy Mass presided over by the Rector Major of the Salesians, Fr Ángel Fernández Artime, at the Don Bosco Shrine in Brasilia.

In the spirit of celebrating the anniversary of the Province, united "in one heart and in one soul", Sunday 11 December 2022, the day on which the anniversary of the Province is officially celebrated, every Salesian presence is also invited to celebrate the "Diamond Jubilee" with a Eucharist and, according to availability and creativity, to offer the possibility of holding a festive oratory.

Later, an institutional video and a magazine for the anniversary celebration will be produced.

All activities related to the Jubilee will be shared on social networks by the hashtag #ISJB75anos.