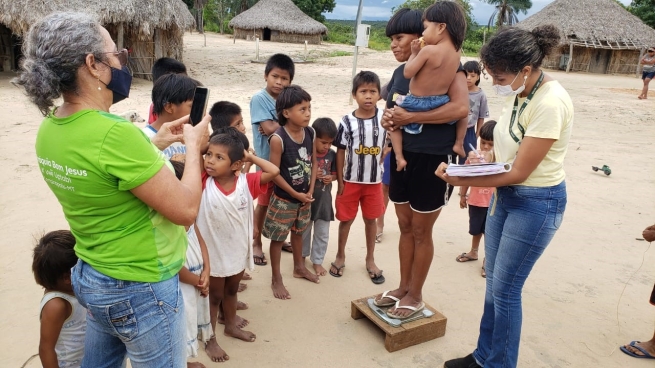 (ANS - Campinápolis) - The Salesians of Don Bosco, the Children's Pastoral and the Center for Indigenous Health (CASAI) are working in collaboration to overcome the serious problem of malnutrition of indigenous children in the area covered by the parish "São Domingos Sávio" in the municipalities of Nova Xavantina and Campinápolis in the Brazilian state of Mato Grosso.

Last week, Salesian deacon José Alves accompanied the coordinator of the Children's Pastoral, Deusmira Moreira, and the nutritionist of CASAI, Delma Cristina, on a visit to the villages inhabited by the indigenous Xavante people of São Pedro, Salvador, Podzenho'u, Immaculada Conceição, Cristalina, Liderança, Bom Jesus and Teihidzatsé. The main objective was to monitor cases of underweight children in the São Pedro health micro-area, guiding parents and referring the most serious cases to the responsible health unit.

"This collaborative work is very good because when people leave here, they already have a list of children in the villages who have already been identified as underweight, very underweight or already suffering from malnutrition and who must be accompanied because of this. Transmitting this data is the health team that is in the area and informs the nutritionist in the city," reveals the Salesian deacon.

The visit is very simple: the nutritionist takes note of the child's low weight or malnutrition and guides the family so they can be sent to the CASAI in Campinápolis for hospitalization. At CASAI, better monitoring of meals is done with food being given several times a day with the nutritionist monitoring the child so they can get out of that low weight situation, acquire a normal weight and, once this is done, return to the village.

One of the difficulties encountered by the team in this work is that there is resistance from some indigenous parents to allow their children to be sent to CASAI, due to the structural conditions of the place where the children's chaperones are housed. There is also a fear that the child or the accompanying adult may have contact with patients with other diseases, such as Covid-19, and become infected. "In cases where parents don't want to bring their children, and we can't force them, we give them a kit offered by the Children's Ministry. This is a 'soup kit' that contains vegetables, noodles, ground meat or chicken, obtained through donations, which are passed on to the family so that the child receives a little more nutrition each day. The challenge is that often food is scarce and there are many people in the family, and then not all families allocate that food to the child who really needs it," explains Fr José Alves.

During last week's visit, in addition to children previously identified as underweight and malnourished, others were found in the same situation. These are children from 0 to 6 years old who undergo periodic evaluation by technicians from CASAI and the Children's Pastoral.

"This collaboration with CASAI is very positive because health personnel are involved, in this case, the nutritionist and also nurses who already work in the area, and they can tell us the most serious cases so that we can intervene with the families and responsible bodies here in the city of Campinápolis. The Salesian mission in the parish 'São Domingos Sávio' is grateful to the coordinator Deusmira and also to the health team that works with the indigenous children," concludes the Salesian.