Ukraine – Fr Ryabukha, SDB: "The Church is close to those who suffer" 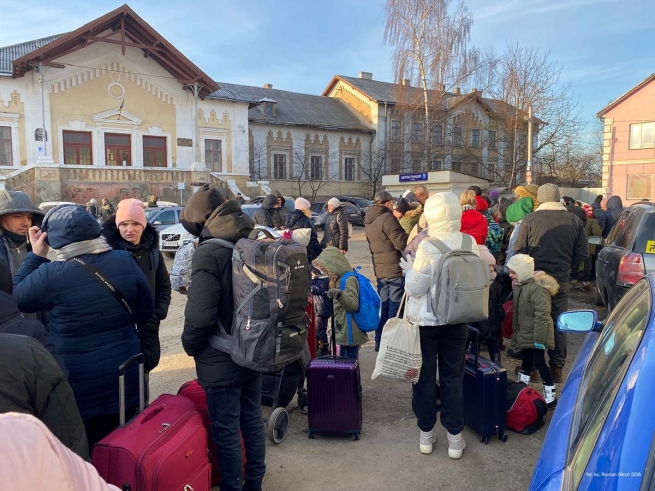 (ANS - Kyiv) - The story of Maksym Ryabukha, Rector of the Salesian house "Mary Help of Christians", on the outskirts of the Ukrainian capital, highlights the pain of a population exhausted by the bombardments: “After the two-day curfew, on Monday there were endless lines to get all the basic necessities. People are afraid, but they resist.” The story of a priest who celebrates Mass in a bunker becomes a sign of hope.

On Monday, Fr Maksym Ryabukha went out early. In the streets of the Ukrainian capital, made ghostly by the fury of the bombardments, he met hundreds of people who poured into the streets with the hope of being able to take home a piece of bread, a little milk, a few bottles of water: the necessities to survive holed up in the basements, in the bunkers inherited from the Cold War, in the underground parking lots converted into makeshift hiding places.

“I've seen very long lines of people trying to get supplies of any kind because we don't know what will happen in the next few hours,” Fr Ryabukha reports to Vatican media. “You have to hurry: at 10 pm tonight you will not be able to circulate again and tomorrow morning at 7 am, when you can go out again, it is not sure that you will still find something to eat,” he explains, worried.

The story of a priest who, in the city of Vyšhorod, less than 20 km from Kyiv, celebrates Mass in a bunker by the light of a light bulb, is a tangible, emblematic sign that the Greek Catholic Church has not abandoned its faithful and the population. And it has also become a symbol of hope. “This priest,” says Fr Ryabukha, “even last Sunday, he gathered under his house with a few people and celebrated the Eucharist, despite the fact that the battle was raging.”

“The Church has many options for help it can offer: the first and most important is spiritual and moral support. Because people really need to feel the support, the strength, the presence of God, and also of their neighbors, of the world,” the priest emphasizes.

Since this war began, the Salesian recalls, “we have never stopped celebrating Masses. We also broadcast them online, through social networks. But we have never stopped visiting families, staying close to refugees. Each priest, in his own parishes, tries to manage, as best he can, the concrete help to people.”