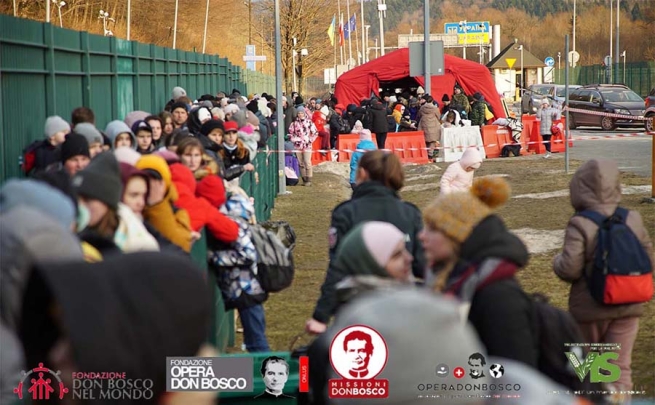 (ANS - Rome) - "We need medicines, especially to treat wounds and tourniquets, painkillers, splints, bandages to stop bleeding." This is the cry for help that comes from the Salesians in Ukraine, all of whom remain in the country alongside the civilian population to help, relieve, distribute food and transport the most fragile people to areas of the country less exposed to bombing or abroad.

To respond to their cry, the Italian Salesian organizations active in the field of international solidarity have decided to unite their efforts in a great chain of solidarity: Fondazione DON BOSCO NEL MONDO (Rome), Fondazione Opera Don Bosco Onlus (Milan), Fondazione Opera Don Bosco nel Mondo (Lugano, belonging to the Lombardy-Emilia Province), Missioni Don Bosco (Turin), and VIS (Rome), are coordinating to channel aid to the Salesian communities present in Ukraine in Kyiv, Lviv, Zhytomyr and in Dnipro, Odessa, Przemyślanya, Bóbrka, and Korosteszów.

In a letter sent to the Salesian Family, the Rector Major also expressed the urgency of remaining close to and sending the help of all "to the neediest people, the displaced, to those who have lost what they had, to those who do not know how to live at this time".

For years, the Salesians have been present in all neighboring countries, too. The Italian solidarity network is in constant contact with them to detect needs and try to help. Coordination between the organizations is aimed at supporting communities in neighboring countries such as Poland, Moldova, Hungary, Romania, and Slovakia. In the latter country, 50 children from a family home in Lviv have already been rescued and are now being hosted by two Salesian communities in the Country.

FONDAZIONE DON BOSCO NEL MONDO: An organization of international solidarity of the Salesian Congregation that works in collaboration with the Salesian missions for the social promotion and integral education of young people in difficulty. www.donbosconelmondo.org

Fondazione Opera Don Bosco Onlus - Milan, Italy: inspired by the educational thought of St. John Bosco, its presence supports the work of Salesian missionaries who bring their work to where help is most needed, both in Italy and around the world. www.operadonbosco.it

Fondazione Opera Don Bosco nel mondo - Lugano, Switzerland: since 1965 it has been supporting Salesian works in mission lands by carrying out structural, social, and educational projects for local populations and in particular for children and young people. www.operadonbosco.ch

Missioni Don Bosco: Salesian non-profit organization founded in 1991 in Turin as a mission office, to support the journey of the most vulnerable children and young people and the most disadvantaged populations around the world. www.missionidonbosco.org

VIS: Salesian NGO founded in 1986 that operates in 40 countries with projects of international solidarity and development cooperation. www.volint.it