Poland – Salesians come to the aid of refugees 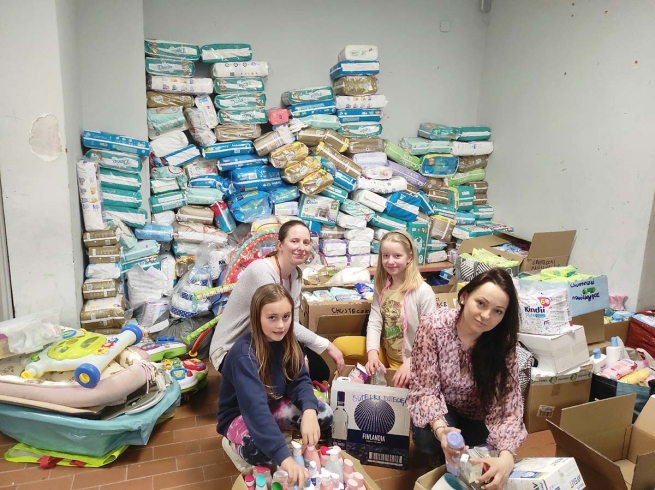 (ANS - Szczecin) - The Salesians of the "St. Adalbert" Province of North Poland (PLN), based in Piła, are responding to the needs of Ukrainian citizens who have taken refuge in Poland in various ways. The Salesian work "Saint Joseph" of Szczecin has been offering its support since the war’s earliest moments.

The center had offered their willingness to accept 32 refugees from Ukraine. It began receiving them on Saturday, February 26, and was filled by Wednesday, March 2, 2022. In total, it welcomed and housed 42 people in the boarding school. These are mothers with children aged 6 months to 16 years, including 3 pregnant women (17 women, 15 girls, 9 boys, and 1 elderly man).

The refugees mostly arrived with a small bag or suitcase, without any real luggage. Thus, the Salesians began collecting the most necessary materials - clothes, non-perishable food, hygiene materials. But there was also a need for baby carriages, cribs, refrigerators, irons...

In agreement with Caritas of the Archdiocese of Szczecin-Kamień, the work delivered most of the collected materials. And, in total, about 70 tons of donations were collected and distributed by 40 trucks and vans.

The action of collecting, sorting, and packaging the donated materials took place for a week, every day from 7 a.m. to 8 p.m. Hundreds of people were involved. At first, it was Salesians, teachers, employees, students and their parents, the kids who attend the center... But they were later joined by many volunteers. "Every day several thousand people brought gifts. For several days we were supplied with free bread and meat," the Salesians recount.

On March 3, the Salesians completed the collection of goods, and as early as March 1, they had opened a bank account dedicated to helping refugees, the money earmarked for the reception of and integral assistance to refugees.

In addition to food and lodging, the service to refugees includes:

- stabilization of cooperation and appointment of a Ukrainian language coordinator for contacts with the dedicated health center;

- assistance in translating/interpreting and in bureaucratic matters and everyday life;

- provision of meals at the train station for incoming refugees;

- setting up of a kindergarten for children;

- organization of daytime activities in Ukrainian;

- organization of Polish language courses for children and adults;

- psychological and pedagogical services in Ukrainian;

- mediation in the Ukrainian language for job search;

- organization of a benefit concert with Ukrainian musicians and singers, with the band "Szczecinanie".

The service carried out by this work is the same as that carried out by many other houses in the same Province, which are also organizing collections of basic necessities and organizing and offering hospitality to refugees. The donations collected are sent to the aid centers in Poland and Ukraine, and also directly to the families welcomed by the parishioners of the parishes run by the Salesians.