Italy – The 2015 Social Budget of the Agnelli Foundation 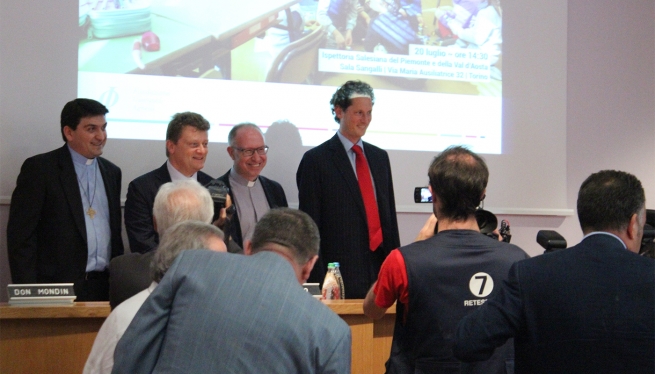 (ANS – Turin) – On July 20th, at the Special Circumscription of Piedmont and Valle d’Aosta (ICP), the Vice-President John Elkann presented the 2015 Social Budget of the Agnelli Foundation. Speeches were delivered also by Fr. Enrico Stasi, ICP Superior, and Fr. Stefano Mondin, Delegate for ICP Youth Ministry.  Stefania Boschetti of Reconta Ernst & Young and Andrea Gavosto, Director of the Foundation, illustrated in detail the main results emerging from the 2015 social budget.

The main activities of the Agnelli Foundation in 2015 were: the new portal eduscopiolavoro, to help in the choice of the senior high school those who soon after the high-school diploma want to start working and so to integrate the other eduscopio portal, which from 2014 is addressed to those who wish to go to university and which has over 360 thousand visitors per year. The programme on school construction, both in terms of research on the national level and of the evolution of Project “Torino teaches”, that in collaboration with San Paolo Company and the city of Turin will bring to the profound renewal of the buildings and learning environments of two junior high schools in Turin.

However, the encounter this year was also the occasion to remember that 2016 and the beginning of 2017 will be a special moment for the institution: in fact, the Agnelli Foundation celebrates its 50 years of activity, as it was created by Avvocato Agnelli at the end of 1966 to remember the one hundred years since the birth of the founder of Fiat, Senator Giovanni Agnelli.

In order to celebrate the 50th anniversary, the Foundation is activating various initiatives, which will be presented in the coming months. The most important is certainly the renewal of the historic headquarter of via Giacosa that – as John Elkann reminded – “will be transformed into a space open to the city and to schools, dedicated to innovation, new enterprises, experimentation and technology”.

The new headquarter of the Foundation will be ready in the first months of 2017, on the basis of an innovating project of architect Carlo Ratti.

Another initiative of the 50th anniversary is the doubling of the solidarity budget, a concrete way to help those who are committed in promoting projects of social inclusion in favour of the youth and the families of Turin and its area.

The first project funded by the doubling of the solidarity budget was developed together with the Salesians. “And it could not have been otherwise – commented Elkann. – With the Salesians there is an historical brotherhood, rooted in the second half of the 19th century, even before the foundation of Fiat”, a brotherhood that was strengthened by the will of Senator Agnelli and which fruitfully continues today, after over one century.

The project concerns the activity of the oratories of 10 Salesian locations of the metropolitan area of Turin: fundamental places for the formation and social cohesion of the youth, with the aim of promoting the active participation of about 250 boys and girls between 17 and 24 years of age: throughout 2017 these youth will be committed in devising and implementing a project called “the art of animating, animating art”, which unites culture, entertainment, formation and work.

Finally, in 2015, the Agnelli Foundation granted 650,000 Euro for initiatives of social solidarity in support of national or local institutions of aid or in the form of direct help to persons in difficulty, employees or former employees of FCA group or presented by Agencies of support. The main criterion that inspired such grants, considering the increase of requests in the latest years, was to select beneficiaries for whom even subsidies of limited amount could make the difference.